Videos of Hindu goons issuing chilling threats to Muslim shopkeepers over the sale of firecrackers bearing the names of Hindu Gods and Goddesses have gone viral on social media. These incidents are believed to have taken place in Dewas district of Madhya Pradesh, which is being governed by the BJP. 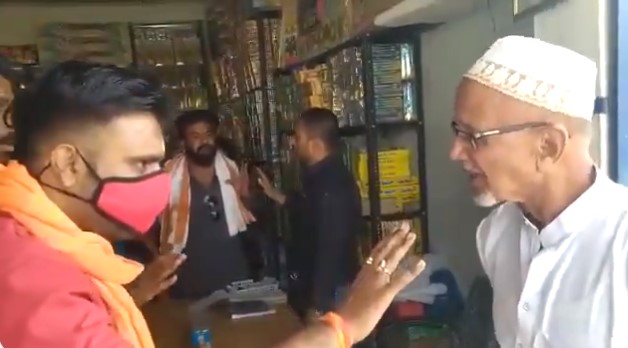 In one video, Hindu goons with saffron stoles are seen threatening a Muslim shopkeeper with dire consequences if he did not stop selling crackers bearing the names of Hindu deities. He’s heard saying, “Next time we will send someone on the pretext of purchasing these crackers from your shop and you wouldn’t like our action if we find you are still selling Laxmi bomb and Ganesh bomb.”

A visibly frightened Muslim shopkeeper assures him to not sell these crackers in the future. To which another goon says, “If a crowd can assemble against a cartoon, then we are also not impotent.”

So what exactly is the law doing ?
No action against these people, going around & threatening traders, none of those exotic acronym law’s ( UAPA , NSA ) etc etc applicable to these thugs ?
& This isn’t the first video doing the rounds. pic.twitter.com/DxmxHJw73b

In another video, Hindu militants are seen threatening an elderly Muslim shopkeeper saying that they would set his shop on fire. This is after the elderly shopkeeper explains that he doesn’t manufacture these crackers and the protesters should direct their anger towards their manufacturers. This prompts one goon to say, “I will have your licence revoked, then don’t say that Hindus have closed down your shop.”

Sharing one such video, Congress leader and former Madhya Pradesh Chief Minister Digvijay Singh tweeted, “It’s the responsibility of manufacturers and the shopkeepers as to whose photos are printed on firecrackers. Modi ji should issue an ordinance banning the use of photos of deities of any religion. The Dewas district administration should act against those issuing threats to innocent shopkeepers.”

The latest development exposes the true colours of India’s so-called liberals, who had moved in with lightning speed to hold Islam responsible for a despicable act of a religious fanatic in Paris after he beheaded a teacher for showing the cartoons of Prophet Muhammad. Some of them had even called for Islam to reform. As expected, the same group of people, Hindutva bigots masquerading as liberals, have refused to blame the religion for the abhorrent act of Hindu fanatics in Madhya Pradesh.