Netizens have taken to Twitter to trend #ReturnTheBodies raising questions on the authenticity of the encounter of three Kashmiri youth in Hockesar in south Kashmir. Three individuals killed were Zubair Ahmad from Turkawangam Shopian, Ajaz Maqbool and Athar Mushtaq from Putrigam in Pulwama. Indian security forces had killed them on 30 December. While the family members of the three slain youth called the encounter fake, Indian security forces said that they were militants and planned to carry out a ‘big attack.’ 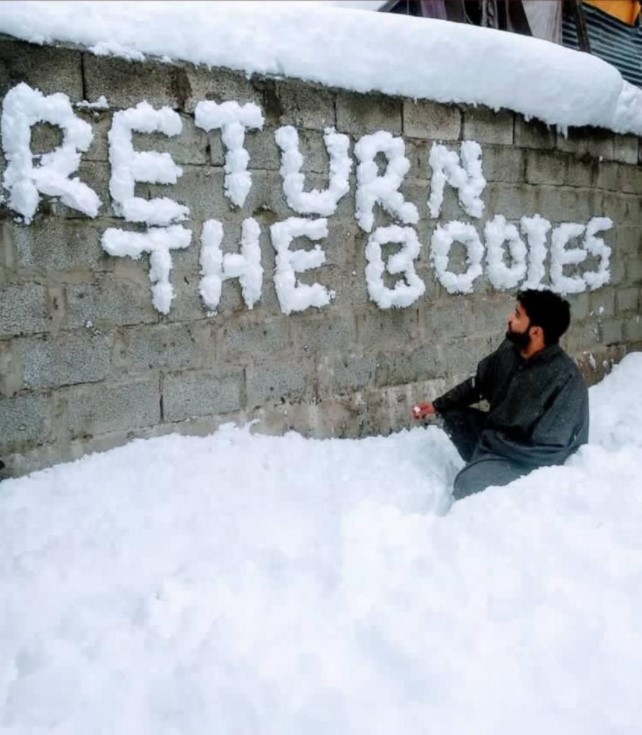 Family members of those killed in the encounter had staged a protest outside the Police Control Room in Srinagar claiming that their children were innocent. The youngest of the three killed was just 17 years old.

Meanwhile, netizens have taken it upon themselves to send a message to authorities by trending the hashtag #ReturnTheBodies by using a gut-wrenching photo where the demand was being written with snow flakes.

In Kashmir, parents don’t even ask for their young ones not to
be killed. They just ask to be able to bury them with dignity. #ReturnTheBodies.#KashmirBleeds #freedom pic.twitter.com/iz1D3qd4Cf

Occupation has given such a deathblow to us that even the snow is silent yet harsh ! #ReturnTheBodies pic.twitter.com/H0pHv13zEl

The only crime of this helpless father and his innocent dead son is that they are born in Kashmir.#ReturnTheBodies pic.twitter.com/Hi8AIXcRcA

Last year, the Jammu and Kashmir Police had filed a charge-sheet indicting three security force personnel including an Indian army captain for killing three innocent youth in Shopian in July. The filing of the charge-sheet had paved the way for the army captain’s court-martial.

The charge-sheet, according to India Today, had read, “They deliberately and purposefully chose not to follow SOPs, they planted illegally acquired weapons and material on their dead bodies after stripping them of their identities and tagged them as hardcore terrorists in possession of war-like stores and deliberately providing false information to colleagues and seniors.”

According to local media reports, security forces have already buried the three youth, killed in the Hokersar encounter, in Sonemarg saying that this was to follow the new protocol established in the aftermath of the coronavirus pandemic.