A video of a Gujarat BJP MLA kicking a woman leader of Nationalist Congress Party has gone viral. Facing widespread condemnation for his shameful act, Naroda MLA Balram Thawani has issued a clarification. 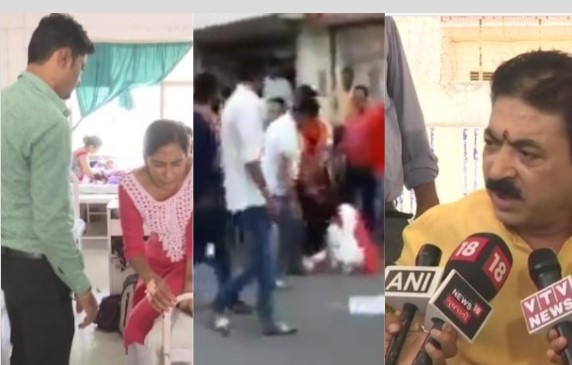 In the viral video, the MLA, dressed in saffron kurta and white trouser, could be seen kicking the woman NCP leader, fallen on the ground. Thawani was seen kicking the NCP leader Nitu Tejwani even as one of the MLA’s henchmen kept slapping her.

Tejwani was quoted by news agency ANI, “I had gone to meet BJP MLA Balram Thawani over a local issue but even before hearing me he slapped me, when I fell down he started to kick me. His people also beat up my husband. I ask Modi ji, how are women safe under the BJP rule?”

Later, the BJP lawmaker said that he was swayed by his emotions and he admitted his mistake. “It was not intentional. I have been in politics for last 22 years,such thing has never happened before. I will say sorry to her,” ANI quoted as saying.

Speaking to reporters, however, the MLA appeared to justify his saying how the group of people who had come to meet him with their ‘pleas’ had planned to cause unrest. He also denied kicking the woman stating that she was accidentally hit.

The BJP, meanwhile, has issued a show-cause notice to the MLA.