A video of Goa Deputy Chief Minister Vijai Sardesai knocking down the mobile phone of one of his officers in full public view has gone viral on social media. Faced with publich criticism, the minister has expressed his regrets. 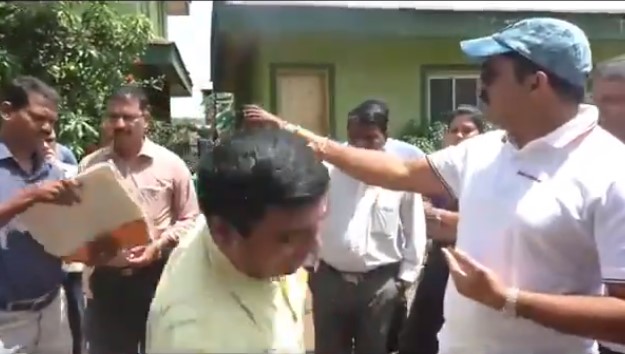 In the video, Sardesai could be seen in conversation with his officers when Chief Officer, MMC, Siddhivinayak Naik’s phone rang. Visibly upset by the development, Sardesai hit at Naik’s hand in anger, knocking down his phone on the ground. In anger, the minister for Town and Country Planning was also heard calling his officer ‘useless’ before asking him to throw away his phone.

The officer was later seen sucking his middle finger, suggesting that Sardesai’s sudden charge at him had left him in pain.

Unaffected by causing public shaming to his officer and even leaving him injured, Sardesai commented, “You do not do any work. You are useless and your chairperson is also useless.”

Sardesai, who heads the Goa Forward Party, was carrying out an inspection of garbage dump in Sonsoddo. His act evoked angry reactions from his political rivals and social media users. The Goa Congress said that this was a shining example of ‘abuse of power by the minister.’

Sardesai later expressed his regrets saying that he was irritated. “I was irritated with the ringing phone when a topic of such seriousness being discussed. I regret that I lost my cool and have expressed regrets to the concerned officer,” news agency PTI quoted him as saying.