Two former office-bearers of the ABVP, the student wing of the BJP, have made stunning revelations on the raging controversy over the JNU’s sedition row. 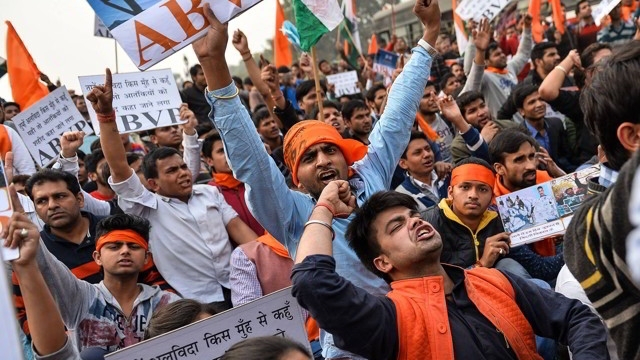 Later speaking to Janta Ka Reporter, Goraiya said that he can identify the ABVP members who chanted Pakistan Zindabad slogans and were ready to debate with Zee News, which had claimed that Kanhaiya Kumar and his friends chanted the anti-India slogans.

He said, “You watch the videos broadcast by Zee News on its DNA programme. There are four videos there. You should watch the fourth video, which was found to be authentic in the lab. Perhaps Zee News doesn’t know that all those standing in the video and chanting Pakistan Zindabad slogans are ABVP members.”

Both Goraiya and Narwal said that the ABVP had staged the controversy with anti-India slogans in order to take the attention away from the adverse media coverage on the death of Dalit research scholar Rohith Vemula in Hyderababd.

“At the time, I remember Jatin and I, since we were Dalits, were told repeatedly to appear for TV interviews and defend ABVP after Vemula’s suicide, which we refused to do since they kept referring to him as a terrorist. With the February 9 event, they saw an opportunity to divert attention,” Narwal was quoted by Indian Express.

The Delhi Police on Monday had filed its charge-sheet against former Jawaharlal Nehru University Students’ Union President Kanhaiya Kumar and others in a sedition case, filed in 2016. The charge-sheet, which also named Umar Khalid and Anirban Bhattacharya among others,  accused Kumar of inciting the mob that chanted anti-India slogans on 9 February, 2016 on the JNU campus.

Both Goraiya and Narwal had left the ABVP in 2016. Goraiya in particular had said that he was ‘tired’ of ABVP’s stand on the attacks against Dalits. He was the fourth such member of the BJP’s student wing, who resigned from the party the same year.