The wife of Tripura Chief Minister Biplab Deb has reportedly filed for a divorce in a Delhi court, reported CNBC-TV18. An earlier report by CNBC-TV18 had claimed that Niti Deb alleged domestic violence and harassment against her husband. 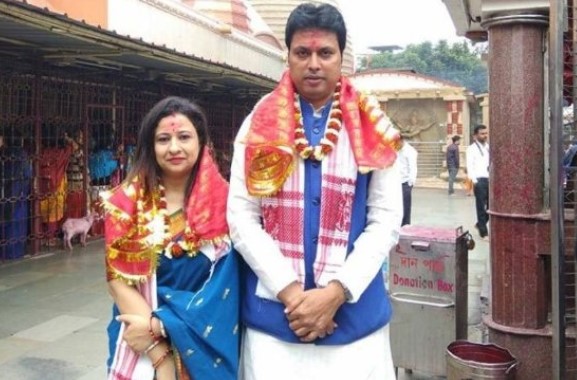 According to CNBC-TV18, which deleted its original tweet reporting ‘harassment charges,’ Niti Deb has filed a divorce petition under Section 10A of the Indian Divorce Act 1869. Section 10A of IDA 1869 is dissolution of marriage by mutual consent.

A Facebook page of Niti Deb also slammed Biplab Deb’s political opponents for spreading the rumour about her allegations against her husband. The Facebook post read, “Rumors have no mouth ,,only dirty,filthy and sick minds generate for cheap publicity and mileage,,and importantly when paid high for spreading such dirty Rumors to gain political advantage against influencial people…otherwise who will follow these culprits… but sad part of it who people react and listen to these empty headed minds, with fake evidence, fake stories and pics used by such culprits, Being female I may say if all of you really loves me and have faith on me kindly teach lesson to these kind of people by boycotting and least bothered abt there existence even…I’m boudi, daughter in law, mother, sister and wife of someone belong to our State,,they not just try to tarnish my image but disrespected the love,affection and respect given to me bu people of Tripura….?????My humble request not provoke nor react on evil heads cheap fake Rumors…Regards.”

Deb, known to be motormouth, became Tripura’s chief minister last year after BJP won a landslide in the assembly elections. 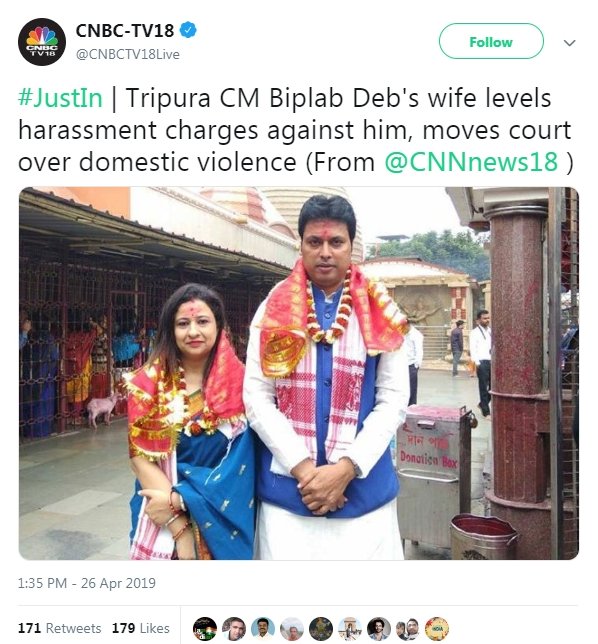 The news of Niti Deb allegedly accusing her husband of domestic violence evoked strong reactions on social media with people slamming the BJP for promoting individuals, who had no respect for women.

Are we even surprised? What else can you expect from a man from the BJP. From abandonment to death under mysterious circumstances to even rape charges, BJP leaders have done it all. Biplab is just another feather in the BJPs Mahila Virodhi Cap. https://t.co/tgHq55GzlR

If you are in BJP, must be a rule that you treat women as DIRT & abuse them. https://t.co/mpvzkY2nf0

biplab deb is being awarded for best cm to impliment bjp's BETI PETAO, BETI BHAGAO project in his own family, among all bjp chief Ministers. Congratulation.

Apparently this is the 3rd time Tripura CM Biplab Deb's wife caught him in a compromising position with another woman in last 1 yr. His wife has now filed for divorce at tees hazari and complained of domestic violence!

Biplab Deb is the true face of BJP ! #BetiBachao

Biplab Deb following the Glorious Footsteps of his Leader – But, his wife refuses to be another Joshodaben! https://t.co/ulPcki8Ria

Deb is known for making outrageous claims in his public speeches. In one of his speeches, he had courted controversy by making extraordinary comments that internet and satellite existed even during the Mahabharat period, which is a legendary narrative of the Kurukṣetra War, believed to have been fought somewhere in the 8th and 9th century BC. Biplab, which in Bengali means revolution, became an object of ridicule even by his own educated supporters.

Biplab Deb then became a target of trolling after he slammed former Miss World Diana Hayden, who won the coveted beauty title in 1997. Questioning the rationale behind crowning Diana as the Miss World, Deb had said that she wasn’t the face of Indian beauty, but Aishwarya Rai was. Many had detected bigotry in Deb’s statement since Diana was  Christian and Aishwarya was a Hindu.

This is breaking news. Please come back to this page for more updates shortly.