The Delhi Commission for Women Chief Swati Maliwal has lashed out at BJP’s Rajya Sabha MP Vijay Goel for calling her anti-national. Maliwal said that she did not need a certificate from ‘filthy, sick moron.’ 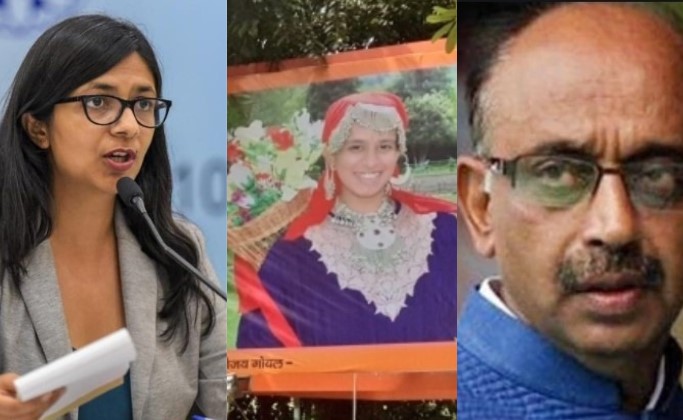 Taking to Twitter Maliwal wrote, “Nationalism runs in my blood & my constant work for my country is testimony but Goel’s only achievement was embarrassing India at Olympics & now disturbing peace & PM’s good work in Kashmir! Don’t need certificate from a filthy sick minded moron! Won’t let the leacher get away (sic)!”

Maliwal had reacted angrily earlier on Saturday after Goel had tweeted a photo of a hoarding a mocking Kashmiri girl in the wake of the abrogation of Article 370. Goel had tweeted the photo of a hoarding, put up inside his official residence in Delhi. In the hoarding, a Kashmiri girl was shown smiling as the text read, “Article 370 gone and your smile.”

Demanding an FIR against Goel and Haryana Chief Minister Manohar Lal Khattar for his objectionable statements on Kashmiri girls, a statement from the DCW had said that the act of Goel and statement by Khattar had impacted all women and girls of the country adding that their action and statements ‘may end up inciting violence in the already sensitive area of Kashmir.’

Reacting to Maliwal’s tweet, Goel wrote on Twitter, “She’s like my daughter. Keep your thoughts clean. For the fear of the people of Delhi they supported Article 370, but the frustration of Kejriwal gang is clear. This statement (by Maliwal) is a sign of the frustration of anti-nationals.”

Congress leader Rahul Gandhi too had slammed Khattar for his controversial statements though Khattar later shared the video of his speech clarifying that he was only referring to the joke on Kashmiri girls.

However, many on social media wondered if it was inappropriate for a state’s chief Minister to even repeat such objectionable sentences on Kashmiri girls although in jest.