The death toll in Bihar floods caused by heavy rains has shot up to 40 with millions continue to remain severely affected by nature’s fury. The Bihar State Disaster Management Authority said that the number of people killed by floods has risen to 40, while nine are reported to be injured. 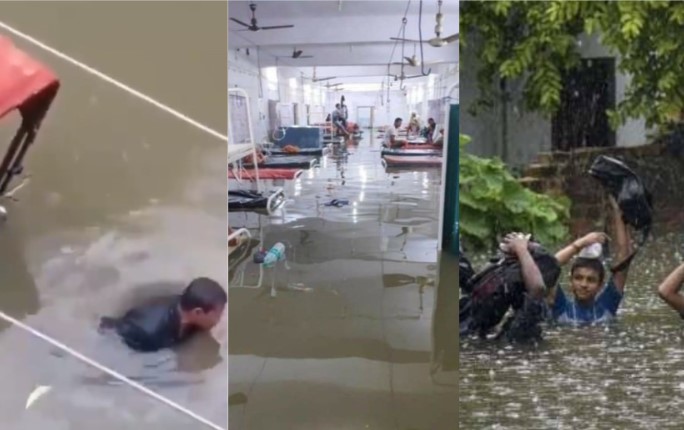 Such has been the calamity that even senior members of the ruling party and the state government have had to shift to safe places after water entered their homes. This included Ajay Alok of the Chief Minister Nitish Kumar’s party and Deputy Chief Minister Sushil Kumar Modi.

The photo of Modi standing helplessly in his T-shirt and shorts with his family members has gone viral on social media platforms.

LJP chief Ram Vilas Paswan and his son Chirag Paswan too have reportedly moved to a hotel instead of their house in a posh locality of the city due to waterlogging. Meanwhile, Chief Minister Kumar on Monday conducted an aerial survey of the affected areas.

The Indian Air Force has deployed its personnel in dropping food materials using its helicopters.

A statement by the National Disaster Response Force said that they had rescued more than 6,000 people from Rajendra Nagar so far. The relief team is also using dewatering machines to clear flood waters from Patna’s SK Puri area.

The Indian media has come under severe criticism for the lack of coverage on the natural calamity affecting millions of people in Bihar. A video of a local resident in Patna lashing out at the media fraternity for not providing the same level of coverage as they did to Mumbai rains and Kerala floods has gone viral.

Year after year, #Bihar is hit by devastating floods. Citizens have taken to social media asking why nobody shows solidarity for them like they do for other states. #patnafloods #BIHARfloods pic.twitter.com/VjG9XD2pqb

Indian Media, Where is this news??

Bihar flood: Over 110 dead in 4 days due to heavy rains across country; Patna struggles to stay afloat | India News – Times of India https://t.co/TL0mc4214r

Nitish Kumar blames the nature for this worst flood condition. Water logged in school, hospital ND many public places. It is very childish to blame the nature, nd get rid of responsbilty.#BiharFlood#BIHARfloods pic.twitter.com/7B3vIM6Vbn

#getwellsoonmodia
Hey I am a pure modi supporter but I must criticize where it is necessary! After looking at the photos and videos of Bihar floods(which are given less attention than deserved in media) I can say that Nitish Kumar govt. has not done good work! pic.twitter.com/sxa2BhVyoh

Several residents in Patna and Muzaffarpur said that they had not seen anything quite like this in the recent time.