Congress MP from Karnataka, BK Hariprasad, courted controversy on Thursday because of his comments allegedly making fun of BJP President Amit Shah’s swine flu. Shah had to be admitted to the AIIMS on Wednesday after being diagnosed with swine flu. 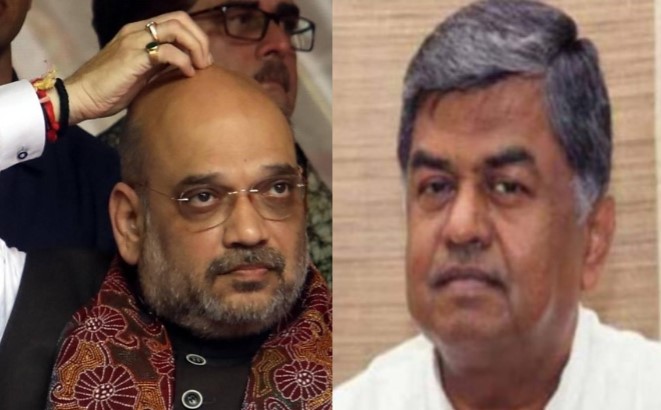 Hariprasad said that Shah had been diagnosed with suwar ka zukaam  and he will suffer a worse fate if he tried to topple an elected government of Karnataka.

His comments led to a full-blown controversy with the BJP slamming the Congress for stooping to a new low. Union Minister Piyush Goyal tweeted, “The kind of dirty and stupid comments that Congress MP BK Hariprasad has given about the poor health of BJP President Amit Shah, it shows their level. There is a cure available for flu, but it’s difficult to find a cure for the mental illness of Congress leaders.”

Many Congress supporters took to Twitter explaining that Hariprasad had only said handhi jwara which is how swine flu is referred to in Kannada. But, Hariprasad himself was seen translating swine flu in Hindi as suwar ka zukaam while speaking to ABP News (see the video above).

Shah had taken to Twitter to announce, “I am suffering from swine flu and being treated for the same. With the blessings of God and your love and good wishes, I shall be fit soon.”

Shah was recently accused of attempting to engineer a defection from the Congress legislative party in Karnataka in a bid to bring the government down. Dubbed as Operation Lotus (BJP’s election symbol), several Congress MLAs had suddenly gone missing from Karnataka. They were later reported to be camping in Mumbai. However, the Congress later said that the BJP’s Operation Lotus had flopped and there was no danger to its government in the state.

Shah is the third top BJP leader to be diagnosed with a medical emergency this week after Union Finance Minister Arun Jaitley and Union Law Minister Ravi Shankar Prasad. Jaitley, as reported earlier, is currently in the US for the treatment of ‘soft tissue cancer.’

Prasad too had to be rushed to the pulmonary department earlier this week. According to doctors at AIIMS, 64-year-old Ravi Shankar Prasad who arrived at the AIIMS was admitted in the pulmonary medicine department, where he ‘is under observation.’