A video of popular Patidar leader Hardik Patel being slapped by an unknown person as he addressed an election rally in Surendranagar in Gujarat has gone viral. In the video, Patel is seen addressing an election rally when a man climbs the stage to slap him. 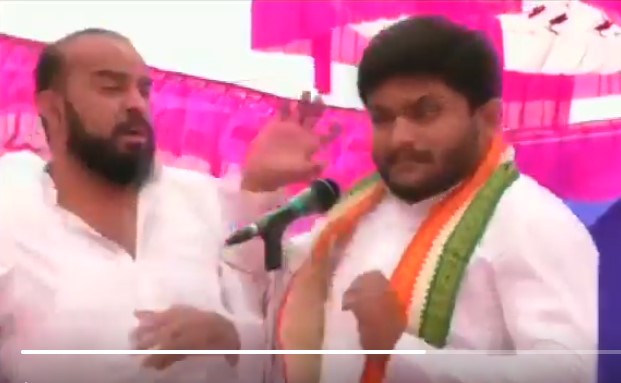 The attacker was later identified as one Tarun Gajjar, who told news agency ANI that he had decided to assault him in 2015, when he faced inconvenience because of the Patidar agitation.

Soon, Patel’s supporters pounced on Gajjar. According to some reports, Gajjar was thrashed by the supporters of Patel. He’s currently admitted in a hospital, where his condition is believed to critical.

He said, “My wife was pregnant when Patidar agitation happened, she was undergoing treatment at a hospital, I had faced problems then, I had decided then, I’ll hit this man. I have to teach him a lesson anyhow. Then again during his rally in Ahmedabad when I had gone to get medicine for my child, everything was shut down. He shuts down the roads, he shuts down Gujarat whenever he wants to, What is he? Gujarat’s Hitler?”

Reacting to the attack, Patel said that the BJP was conspiring to kill him but he wouldn’t remain silent.

Earlier, Patel had to cancel his trip to Lunawada in the Mahisagar district of Gujarat after a local resident refused to allow his helicopter to land on his private land. The 25-year-old was later forced to travel to the area in a car.

Last month, Patel, who shot to prominence from the 2015 Patidar agitation, joined the Congress in the presence of Rahul Gandhi.

On Thursday, BJP MP GVL Narasimha Rao was attacked with a shoe during a live press conference at the party headquarters in Delhi. He had accused the Congress of orchestrating the attack.