Chief Justice of India NV Ramana on Thursday refused to list the appeal against Karnataka High Court’s order upholding the ban on hijab for Muslim girls. CJI Ramana told the lawyer to not sensationalise the matter as he rejected the argument that Muslim students would lose one crucial year of their career due to the ban on hijab. 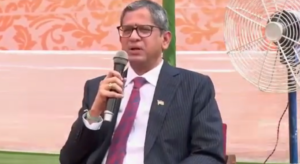 Lawyer Devadutt Kamat informed the Supreme Court how exams were approaching as he urged the CJI to list the matter as a matter of urgency.

Refusing to give a specific date for the hearing of the appeal, CJI Ramana bluntly replied, “This has nothing to do with exams. Don’t sensationalise the issue.”

According to the Bar and Bench website, Kamat said, “1 year will go. They are not being allowed to enter schools.”

To which, CJI Ramana said, “Next item please.”

CJI Ramana had earlier refused to list the matter saying that he will hear the case after the Holi vacation. This was after Kamat and senior advocate, Sanjay Hegde, requested Ramana to hear the case on priority.

The Karnataka High Court this month had upheld the ban on hijab for female Muslim students saying that wearing Islamic headscarves was an essential part of Islam.