The Congress on Thursday launched a tirade against Smriti Irani after the CAG report pointed to fraud and misappropriation of MPLAD Funds allocated to Union Textiles Minister because of her status as Rajya Sabha MP. 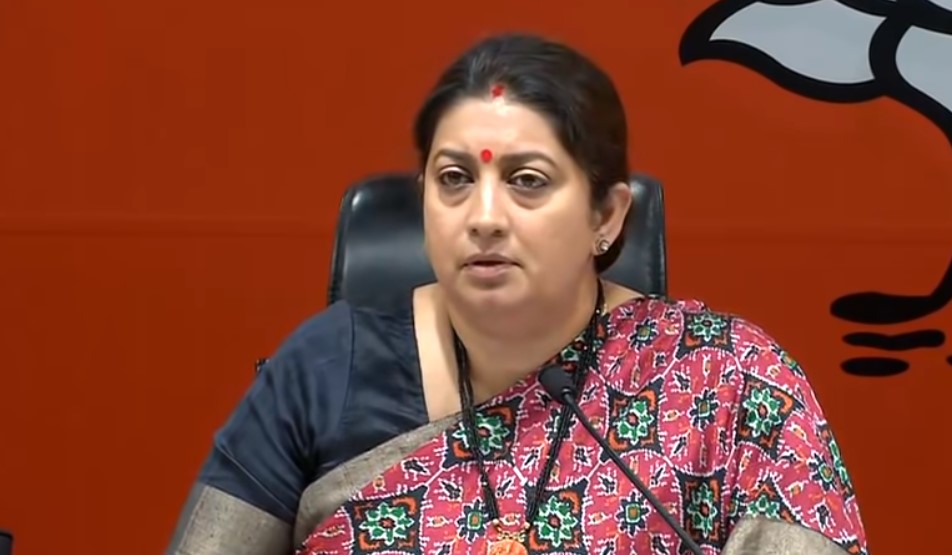 Demanding Irani’s sacking from the cabinet, a statement from the Congress said that ‘major bungling, fraud and misuse of public funds allocated under MPLAD Scheme to Smt. Smriti Irani, Union Minister stands exposed by CAG Report No 4 of the 2018.’ It said, “Time has come to sack Union Minister, Smt. Smriti Irani and lodge an FIR against her for proper investigation under Section 13 (1) (d) of the Prevention of Corruption Act, 1988 and different provisions of Indian Penal Code.”

Irani was elected as Rajya Sabha MP in August 2011 from Gujarat. She had chosen Anand as her nodal district for implementation of works under the MPLAD scheme. The recent CAG report has concluded that she was in violation of the established guidelines while awarding contracts worth Rs 5.93 crore to an NGO, Shri Sharda Majoor Kamdar Co-operative Society, Kheda without floating any tenders.

The said contract, the Congress alleged, was awarded to the NGO only after Irani’s PA instructed the local authorities to do so. Scathing in its criticism, the CAG report said, “The Hon’ble MP had recommended 276 works with an estimated cost of Rs 8.93 crore for the years 2015-17. Of these, the DPO awarded 232 works with an estimated cost of Rs 5.93 crore to Shri Sharda Majoor Kamdar Co-operative Society, Kheda, a Non-Governmental Organisation (NGO). Audit observed that the selection of the NGO as IA was in contravention of the scheme guidelines and government instructions, as no tender procedure was followed for its selection.”

Allegations of illegal nepotism wasn’t the only wrongdoing that the CAG detected in its report. It also found that Irani’s favourite NGO had also resorted to fraudulent practices by forging documents. The CAG report added, “Serious lapses were observed in the eight jointly verified works where the NGO had either not carried out the works allotted or the works were left incomplete. However, the payment of Rs 5.93 crore was made to the NGO for 232 works during 2014-17.”

The DPO Anand, added the CAG report, had accepted negligence on the part of officials of the DPO and stated (June 2017) that the NGO had submitted fake documents which is a serious financial irregularity.

Among the requirements for the payment to be made were submission of photographs of the completed works by the NGO. However, the NGO did not submit photographic evidence to 88 works worth Rs 4.30 crore that it claimed to have completed between 2014 and 2017. The NGO had used duplicate photos for 65 works worth Rs 65 lakhs between 2016-17. Yet, the NGO was paid in full from Irani’s MPLAD funds.

The NGO chosen by Irani had also submitted fake photos to prove that it had completed six projects worth Rs 13 lakhs, which was paid in full. But the joint visit later found that none of those works had been completed.

The NGO chosen by Irani did not spare even the places of cremation for Hindus. The report made a stunning disclosure on the financial irregularities and fraud in the construction of crematoria for the Patel Samaj and Kshatriya Samaj. It read, “Two work orders (2014-15) for construction of crematoria for Patel and Kshatriya Samaj at Mangrol at a cost of Rs 16.67 lakh and Rs 54.86 lakh respectively stipulated two sheds for cremation, compound, wall, paver block, lawn with compound wall, bathroom and plantation works at each crematorium. However, during joint field visit, it was observed that the works had not been carried out as per their scope of works.”

“Further, the cost of shed and platform at Patel Samaj crematorium had been donated by some donors and not met from MPLADS funds. However, the DPO had made full payment of Rs 71.53 lakh to the NGO on fake completion certificates submitted by the NGO.” 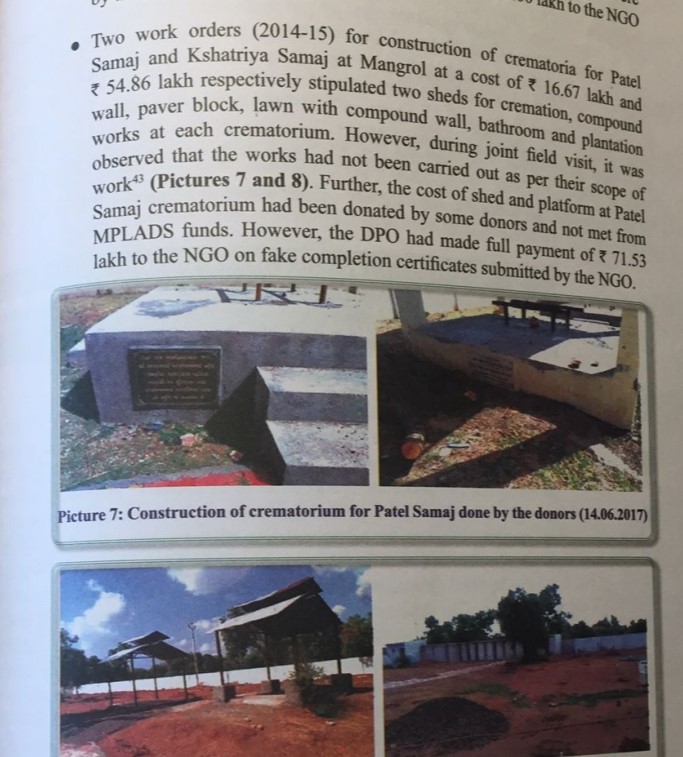 The Congress alleged that the NGO selected by Smriti Irani was ‘supposed to be a co-operative society of construction labourers’ but all its members belonged to the union minister’s party, the BJP.

The statement from the Congress said, “That even collector, Anand district had written a letter dated 20th June 2017 to the Deputy Secretary, General Administration Department, Gujarat pointing out the irregularities and the fraud being committed under the grants received under MPLAD.”

In July 2017, local Congress leaders had filed a PIL in the Gujarat High Court accusing Irani of illegally using MPLAD Funds in violation of the guidelines for their use.