Jyotiraditya Scindia may have left the Congress to join the BJP many months ago, but his emotional attachment with his old party refuses to wane. This was evident when he sought votes in favour of BJP candidates in the assembly polls in Madhya Pradesh. In a viral video, Scindia was seen committing an embarrassing gaffe as he urged BJP supporters to vote in favour of the ‘hand symbol’ of the Congress party. Scindia’s embarrassing gaffe occurred in the presence of BJP leaders. 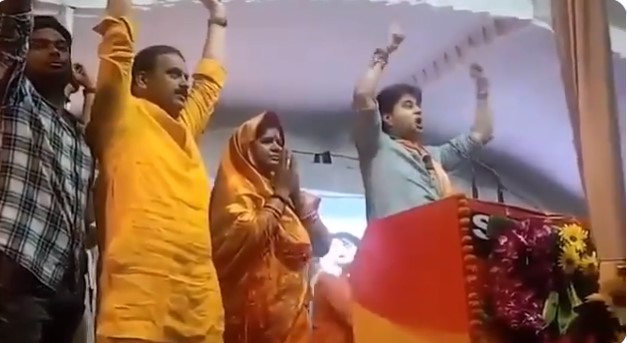 In the viral video, Scindia was seen making a passionate appeal as he said, “Give me an assurance that you will press the button belonging to the hand symbol.” His utterances left BJP leaders including the local candidate in a spot of bother as they looked at each other in shock.

Scindia soon corrected himself as he said, “And the button belonging to Lotus symbol must be pressed.”

As expected, the video is being widely shared on social media with Twitterati taking potshots at Scindia’s predicament. Madhya Pradesh Congress tweeted from its official handle, “Scindia ji, people of Madhya Pradesh can assure you that only the button belonging to hand symbol will be pressed on 3 November.”

Our chhota maharaja is a bit confused about the party he belongs to!? pic.twitter.com/THXrWuF9qC

When I look at Scindia’s speeches these days I feel like no one has to join National School of Drama anymore, you can just join BJP.

Jyotiraditya Scindia has become such an embarrassment

In another viral video, Scindia was calling himself a dog whose owners were the people of Madhya Pradesh and he was willing to bite those who raised fingers at them. He had said, “I am rpiud to be a dog of my people.”

As many as 28 assembly seats are up for grabs in the 3 November bypolls. 22 of them are those seats that fell vacant after Scindia’s loyalists left the Congress to join the BJP earlier this year. This had resulted in the fall of the Kamal Nath government. The BJP needs to win just nine seats to maintain its grip on power in the state.