BJP MP Sakshi Maharaj is not new to controversy as the parliamentarian from Unnao has found himself in the spot of bother for his loose comments or actions. On Saturday, the controversial lawmaker faced incessant social media roasting for his decision to insult a fallen soldier during his last journey. 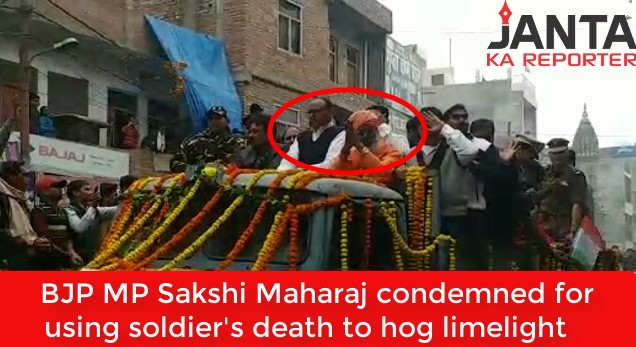 This was after soldier Ajit Kumar Azad’s body arrived in Unnao, his home town, where thousands thronged to pay their last respect to the fallen hero. Maharaj occupied the front row of the truck that carried the slain CRPF soldier’s body and kept greeting the crowd as if he was the centre of today’s attraction.

Kumar wasn’t alone in finding Maharaj action in poor taste. User Harsaran Singh wrote, “Was it a funeral procession or a election rally that he was to climb atop the cortege truck? Some people will go any length to defend shamelessness.”

User Bharath Srinavsan wrote, “What’s to be clear… Why is he standing forefront n taking d things on him. Shouldn’t he b coming in his own vehicle n not step on d Martyr’s convey. That’s that.” “Sakshi Maharaj wants to use every opportunity to gather votes,” wrote one Ankit Mishra.

Will politicians listen? These are poor families and shameless people like Sakshi Maharaj just plonk themselves everywhere to take political mileage. https://t.co/tT968Qvl4P

This is disgusting! Somebody should've thrown that foul-mouthed Sakshi Maharaj from the truck. This is is true anti-nationalism https://t.co/jVdWHdmcXS

Does this rape, extortion and murder accused, former Tihar intern BJP MP Sakshi Maharaj even knew that it was the final journey of Martyr Ajit Kumar Azad, not his own! #BJPinsultsMartyrs #PulwamaTerroristAttack #IndiaUnited https://t.co/LlzjKggxmR

Earlier, Prime Minister Narendra Modi had come under huge condemnation for seeking votes in Jhansi hours after the terror attack in Pulwama had killed 42 Indian soldiers. Modi faced criticism for choosing to hold an election rally during the national mourning period.

On the day of the terror attack, BJP President Amit Shah was holding an election rally in Karnataka, while his party colleague and Union Minister Piyush Goyal had gone ahead with his plan to seek alliance partners for this year’s Lok Sabha polls in Tamil Nadu. Another BJP MP Manoj Tiwari was seen entertaining crowd at a musical concert in Allahabad, hours after the deadliest terror attack on Indian armed forces had left dozens of soldiers dead.