The BJP increased its tally to 74 in Bihar as the NDA registered a comprehensive win in the just-concluded assembly elections in the state. The NDA comprising the BJP, the JDU, the VIP and the HAM won 125 out of 243 seats in the Bihar assembly while the Mahagathbandhan consisting of the RJD, the Congress and the Left parties could win only 110 seats, 12 short of the majority mark. Asaduddin Owaisi’s AIMIM also won five seats one seat each went to Independent and Chirag Paswan’s Lok Janshakti Party. 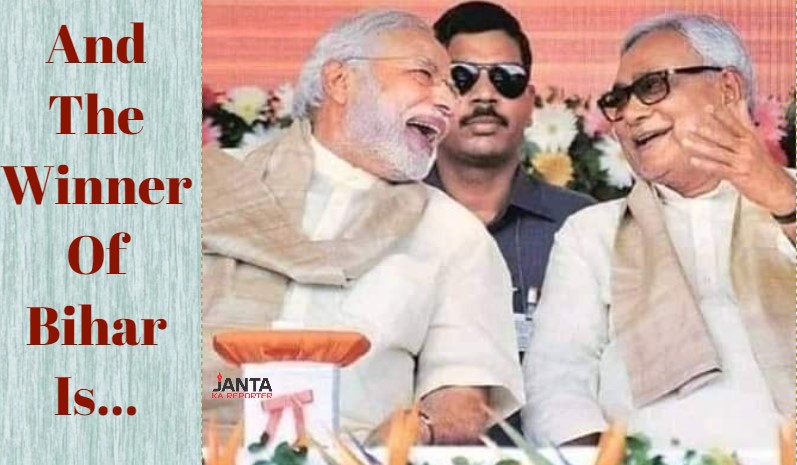 The results came in a sharp contradiction to what several exit polls had predicted for the RJD. India Today and News18 had predicted a complete rout for the NDA, while Arnab Goswami’s Republic TV had said that Mahagathbandhan or the Grand Alliance would win up to 138 seats. 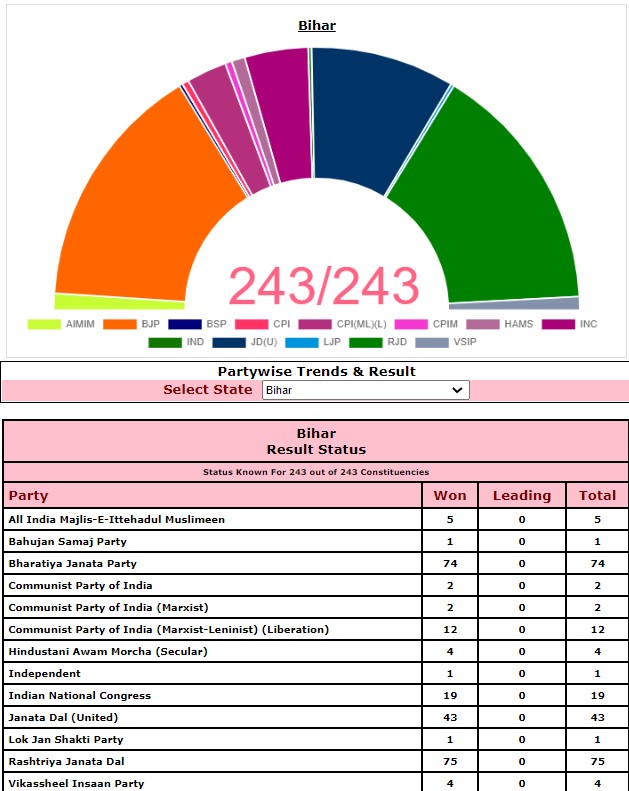 The results triggered a huge political controversy as the Congress and the RJD alleged a large-scale fraud during the counting of votes. According to the RJD, its candidates had emerged victorious on 119 seats and returning officers even congratulated them, but they were later told that they had lost their elections.

The Congress too listed out several instances of similar foul play as the party’s chief spokesperson, RS Surjewala, frantically tweeted, “Congress candidate from Rajapakar in Vaishali, Pratima Kumari, says she won by 1,720 votes, but the DM is refusing to issue her certificate. This is neither a democratic practice nor legally correct. Where’s Election Commission?”

While the RJD emerged as the single-largest party with 75 seats, the Congress’ performance was the worst. The party had fielded candidates on 70 seats but could win only 19 of them. The party had won 27 seats by contesting on 41 seats in 2015 assembly polls.

While Nitish Kumar may have won a fourth term in office, his party’s tally sharply fell to 43 from 71 that it won five years ago. The BJP, on the other hand, increased its tally from 53 to 74 in this year’s polls. Many predict a huge political turmoil in Bihar politics in days to come as the saffron party may stake its claim for the chief minister’s post in light of its increased share of seats in the assembly.

The NDA, particularly the BJP, had reasons to smile in other states as it won most of the seats that had gone for bypolls. The JDU won the Valmiki Nagar Lok Sabha seat in Bihar, while the BJP won 19 out of 28 assembly seats in Madhya Pradesh. The bypolls were necessitated after more than 22 Congress MLAs left the party in March this year to join the BJP. The remaining 9 seats went to the Congress.

In Gujarat, the BJP won all eight assembly seats that gone for bypolls. The lone seat of Haryana was won by the Congress candidate, who defeated former wrestler Yogeshwar Dutt comprehensively.

Karnataka’s both seats were won by the BJP, while the Congress won the only assembly seat that had gone for the bypolls in Jharkhand.