Bihar Chief Minister Nitish Kumar on Friday lost his cool during a media interaction after he was grilled about the chilling murder of IndiGo executive Rupesh Kumar Singh. Kumar particularly targeted a journalist from NDTV asking his political allegiance. 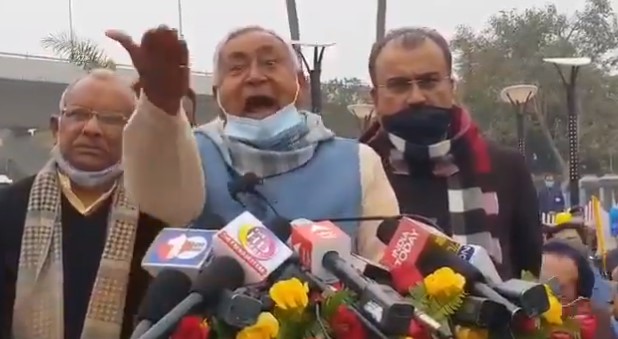 A visibly rattled Kumar said, “You better know this. You should also visit other states. Can I even speak to you? You are such a great human being. Who are you supporting? I am asking you directly.”

Nitish Kumar is facing criticism for the alarming rise in crimes in the state. Hiw own ally, the BJP, has questioned the deteriorating law and order in the state after Rupesh Kumar Singh murdered in Patna, barely a few kilometers away from the chief minister’s official residence.

The IndiGo executive was killed outside his house while he was waiting in his SUV for the gate to open. Two bike-borne people allegedly opened fire at him. RJD leader Tejashwi Yadav had asked Prime Minister Narendra Modi why he was silent on the ‘jungle raj’ in Bihar when the JDU-BJP alliance was running the government.

The police have not been able to arrest Singh’s killers till date.

Kumar also spoke to the Director-General of Bihar Police and directed him to make himself available to speak to reporters. This was after reporters alleged that the DGP had become inaccessible for them.

How @NitishKumar reacted today to tough questions from @ndtv pic.twitter.com/obcaaNmxp6

No sooner did Kumar speak to the DGP, the Bihar Police released a statement highlighting two phone numbers that reporters can use to reach out to the police chief.