Cyclone Amphan has caused large-scale destruction in Bengal, leaving a trail of devastation in North 24 Parganas, South 24 Parganas and Kolkata. Even places like Howrah, West Midnapore, East Midnapore, Purulia and Bankura have reported severe damages by Wednesday’s cyclone. The cyclone, one of the worst for Bengal in living memory, damaged thousands of houses, uprooted trees and electricity poles and left at least 72 people dead. The death toll across India and Bangladesh has reached 84. Among those killed is one 13-year-old girl, identified as Lakshmi Kumari from Howrah, who died after a tin roof fell on her. A man and a woman died in 24 North Parganas after coming under trees due to the strong winds. 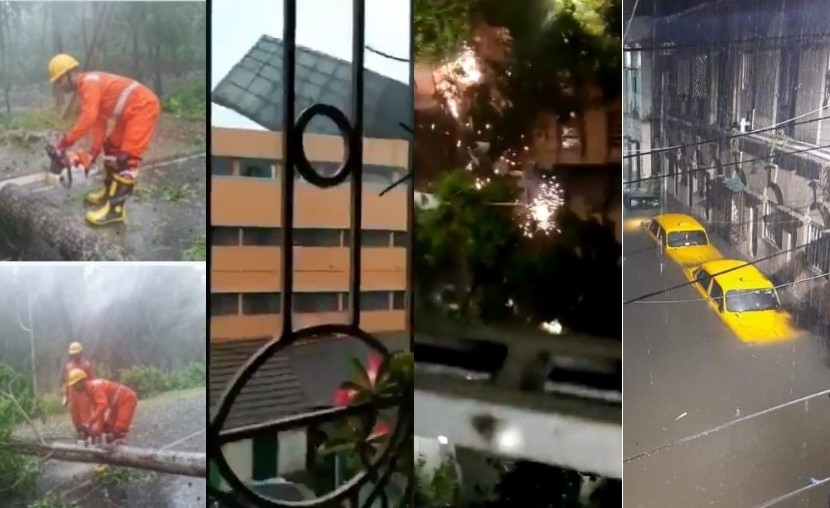 Twitter has been inundated with horrifying visuals of large-scale devastation. In one video, the roof of a school in Howrah can be seen being blown away by the storm. In another visual, electricity transformers could be seen exploding in Kolkata leaving a trail of huge flames amidst the heavy downpour.

In one visual, a tree was seen catching fire after being struck by lightning.

OMG! destruction caused by #CycloneAmphan in Kolkata. Have not been able to connect to many friends. Please pray for them. pic.twitter.com/Iq36yjCdog

A visibly pained Banerjee said that the communications system in the affected areas had completely collapsed. “Everything is finished. From embankment to houses to light posts, everything is destroyed,” the chief minister said. Banerjee said that she did not expect the cyclone of this magnitude to make landfall in Bengal.

Another frightening visual from Bengal. Tree catches fire after being struck by lightning. Guys please keep praying for people of Bengal. I’ve never seen anything like this in my life in Kolkata. Reminds me of #SuperCyclone of 1999. #CycloneAmphan pic.twitter.com/wsDqBQdPtj

The cyclone had made landfall at 2.30 pm between Digha in West Bengal and Hatiya island in Bangladesh before wreaking havoc across the coastal belt.

Here are the LIVE UPDATES:

Kolkata Airport after the cyclone. ? pic.twitter.com/AcepbqvDBy