Speaking at an event organised by TV9, Shah said, “We never said that Robert Vadra should be jailed. We said that corrupts should be jailed. We also said that Robert Vadra has indulged in rampant corruption. These two should be seen separately. We don’t work with a political vendetta. That’s the difference between the BJP and the Congress. After crossing multiple layers in the investigation, the probe agencies have filed a charge-sheet against Vadra. And don’t worry, even after this year’s elections, the BJP will form the government and our fight against corruption will continue.” 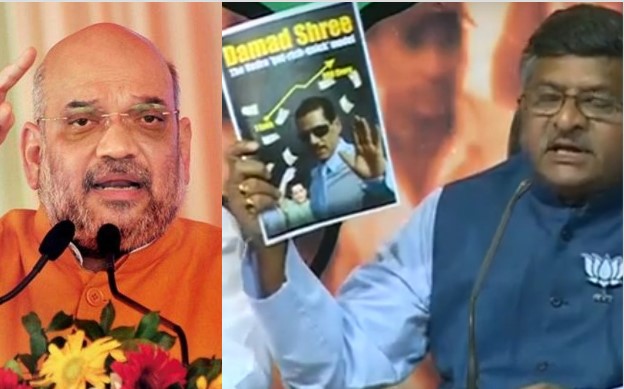 Contrary to Shah’s claims, several BJP leaders had promised to send Vadra to jail. Prominent among them was Uma Bharti, who had told reporters in Jhansi on 12 April 2014 that the ‘son-in-law of Sonia Gandhi had been involved in several falsehood and after the election, if BJP comes to power then you must be sure that he would be in jail.’

In the press conference called to unveil the ‘Damad Shree’ booklet, the BJP had also played a film in the voice of Union Minister Smriti Irani’s narration and termed Robert Vadra a ‘land mafia.’ Prasad had added, “Many Congress leaders, Digvijay Singh in particular, have asked ‘where’s the crime in Robert Vadra’s land dealings?’ So, the criminal offences in the Robert Vadra model that needed investigation have been highlighted in this booklet.”

Amit Shah’s mellowed tone is now indicative of the fact that the government agencies have found nothing incriminating against Vadra that could be enough to prosecute him under the charges of corruption. Shah’s mellowed tone on Vadra is in sharp contrast to the high-profile press conference that his party had held on 27 April 2014, right in the middle of the Lok Sabha polls.

It seems the BJP is finding it difficult to explain its allegations against Vadra. Shah was the first BJP leader to have termed Prime Minister Narendra Modi’s promise of Rs 15 lakh a ‘jumla.’ It seems, he’s just declared the promise to take action against Vadra another election ‘jumla’ by the BJP.