Congress leader Digvijay Singh has lashed out at AAP leader Arvind Kejriwal for his remarks made during an old interview with Arnab Goswami vowing to never contest polls. Singh used the video clip from the old interview to slam Kejriwal, now Delhi’s chief minister, for his perceived hypocrisy and support to the Narendra Modi government. 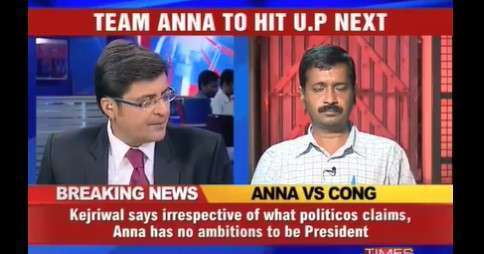 In an old interview with Goswami, Kejriwal had said, “Arnab I made it very clear and again I am making it very clear on your channel, on your programme today. I will never fight elections in my life and I don’t want to hold any post in my life.”

Soon after that claim made on Arnab Goswami’s programme, Kejriwal launched his political outfit, the Aam Aadmi Party, and contested polls in Delhi before developing a pan-India political ambition.

Reacting to the content of that interview, Digvijay Singh tweeted, “UPA brought Lok Pal as desired by Anna Hazare-Kejriwal-Prashant Bhushan-Yogendra Yadav Team. Minus Kejriwal where are they? How many cases of Corruption have been submitted to Lok Pal by Kejriwal led AAP? Does that mean there is no corruption now?”

The veteran Congress leader added, “I had said in 2012 that Lok Pal Agitation was planned by RSS to divert the mind of people from involvement of RSS Activists in Bomb Blast cases. Arvind Kejriwal was a part of the Plot. I had also said AAP is a B Team of RSS in their plan for “Congress Mukt Bharat”.”

Singh said that if he remembered correctly, ‘Arvind Kejriwal had accepted the fact that he was a RSS Activist and attended Shakhas (sic).’

“If it is not true he should contradict it. I would withdraw my statement. If my statement is correct then he should be bold enough to accept it,” Singh said.

UPA brought Lok Pal as desired by Anna Hazare-Kejriwal-Prashant Bhushan-Yogendra Yadav Team. Minus Kejriwal where are they?
How many cases of Corruption have been submitted to Lok Pal by Kejriwal led AAP? Does that mean there is no corruption now?
1/n https://t.co/scr1uDE1TP

Singh asked, “The question is why is he not opposing the Communal Agenda of BJP/RSS? Why his Govt and his Party not working actively for Communal Harmony in Delhi? Why is he absent and quiet when atrocities are being committed on innocent Minorities and Hindus in Minority areas?”

Kejriwal has faced widespread criticism for his silence on the brutalities committed against Muslims in Delhi during the 2020 riots and, more recently, this month when communal clashes broke out in Jahangitpuri.

After becoming Delhi’s chief minister, Kejriwal and his supporters officially boycotted Arab Goswami. However, the AAP leader has performed a U-turn even on this stand. Not only has he ended the boycott of Goswami, but the controversial TV anchor’s Republic TV has also been receiving crores of rupees of funding through government ads to carry out hate propaganda against Muslims in India.