Bollywood megastar Salman Khan’s image of a Dabangg star took a severe beating recently after he was seen acting in a weak manner in front of Bigg Boss contestant namely Siddharth Shukla. Many believed that Salman’s failure to act sternly against Siddharth was primarily due to his fear of being insulted by a small-time actor in front of millions of TV audience. There have been several instances during this year’s Bigg Boss show when Siddharth has shown Salman his place conclusively proving that he was more powerful than the Bollywood megastar. But, the Bigg Boss host has been caught showing his machismo in front of an over-excited poor fan at the Goa airport. Not only did Salman misbehave with the poor fan but also snatched his mobile phone. His action has prompted politicians from both the BJP and the Congress to demand a ban on his entry in Goa. 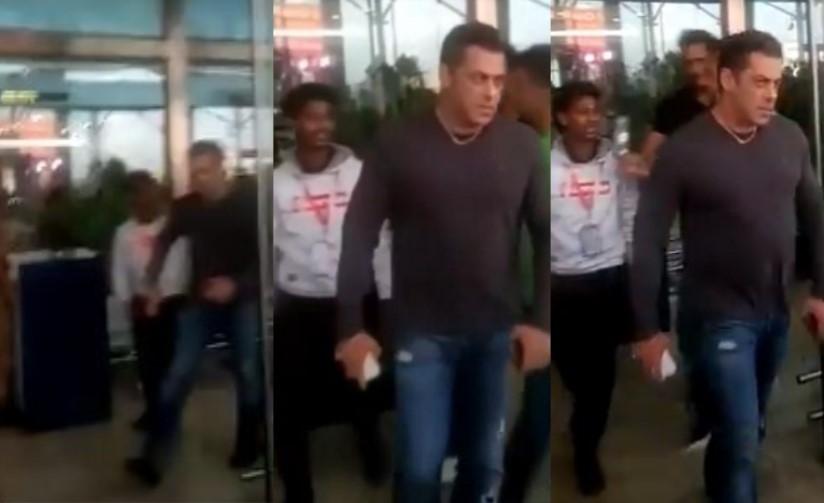 In the viral video, Salman is seen emerging out of the Goa airport when an over-excited fan attempts to click a selfie with his screen idol. Even though he clicked the selfie from a distance without touching the actor, Salman lost his cool and pounced on the fan to snatch his mobile phone. It’s not clear if he later returned the phone of the fan in question. His action has united the BJP and the Congress in condemning the controversial Bollywood star.

Former BJP MP Narendra Sawaikar tweeted, “Being a celebrity, people & your fans will take selfies in public places. Your attitude & behaviour is most deplorable. You have to tender an unconditional public apology.”

Being a celebrity, people & your fans will take selfies in public places. Your attitude & behaviour is most deplorable. You have to tender an unconditional public apology. @BeingSalmanKhan https://t.co/vt6YmRgf98

Elsewhere, the Congress-affiliated NSUI too has lashed out at Salman asking the state government to permanently ban his entry in the state. “I request your kind authority to look into this matter with utter seriousness and demand an apology from the actor on public platform since it was a disgrace to the fan publicly, failing which such violent actors with a bad track record should not be allowed to visit Goa in the future,” news agency IANS quoted a letter from the NSUI.

The person trying to click a selfie with Salman was an airport employee. Salman has chosen to not comment on the controversy till now. He was in Goa to shoot for his upcoming release Radhe: Your Most Wanted Bhai.