Bollywood actress Twinkle Khanna is known for posting quirky and witty tweets even though her social media posts have often triggered controversies. The latest in the series is her social media post in response to spiritual guru Sadhguru’s tweet likening champion athlete Hima Das to a ‘golden shower.’ Her response has evoked angry reactions from the supporters of Sadhguru, whose real name is Jaggi Vasudev. 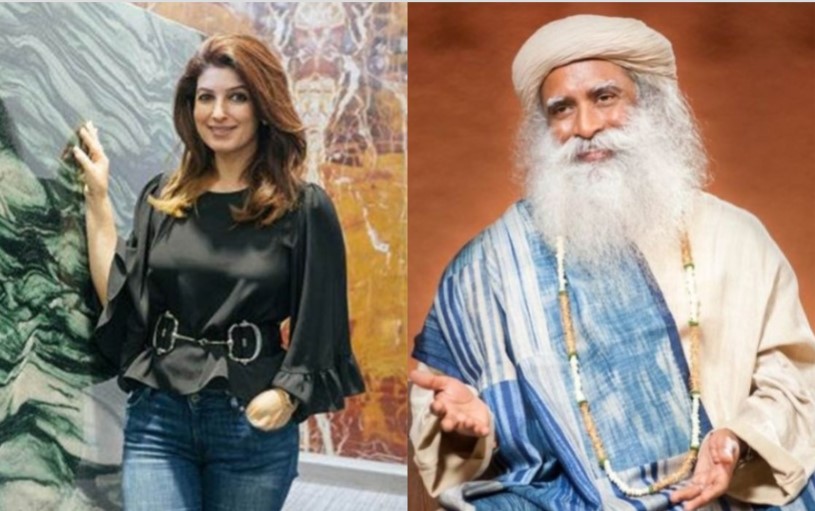 While congratulating Hima Das on her fifth gold medal in the track and field event in Europe, Sadhguru had written, “Hima Das, a Golden shower for India. Congratulations and Blessings.”

His ‘golden shower’ tweet for Hima Das did not go down well with Twitterati as many began to troll him incessantly with some even asking him to delete the post. This was because the term ‘golden shower’ is often used as a slang for an act of urinating on someone during sexual encounters.

It seems Twinkle too reacted to Sadhguru’s tweet and wrote, “And here I thought we were all into only Gomutra (cow urine).” She ended her tweet with hashtag #HimaDasIsTheGoldStandard. 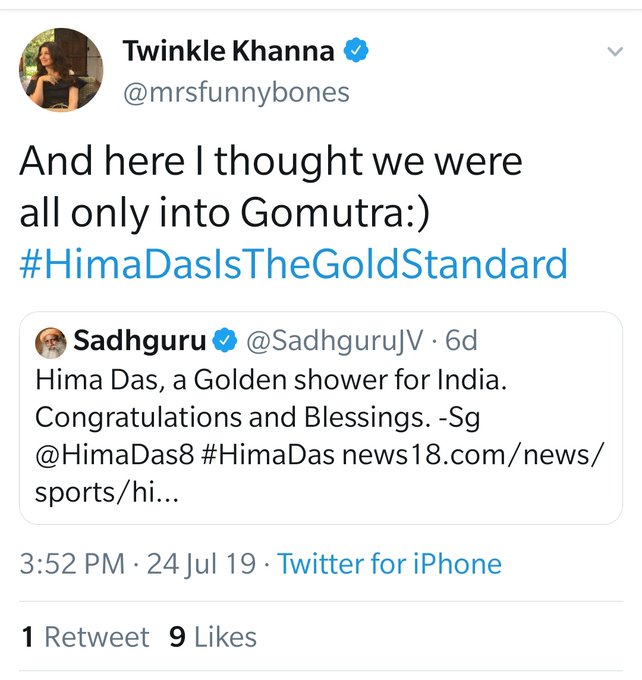 Her tweet, now deleted, evoked angry reactions from the supporters of Sadhguru. Here is how they reacted:

Amazing what gets importance these days!!! @mrsfunnybones perhaps deliberately misunderstanding golden shower (sone ki baarish) comment by @SadhguruJV. On the other hand @RahulBose1 bitching about exorbitant price at a 5 star! Have you stayed for the 1st time at a 5star???

Stop criticizing poor @mrsfunnybones for a benign tweet. She doesn’t know what Gaumutra is, neither does she know what blessing is OR for that matter, what a shower is!! pic.twitter.com/1QvgG5XBjd

Karma will definitely haunt this arrogant & shameless lady @mrsfunnybones for hurting millions of @SadhguruJV followers for making fun of an innocent tweet.

This is not the first time that Twinkle has had to delete her tweet. She was embroiled in a huge controversy for tweeting against Sri Sri Ravi Shankar. Taking a dig at the Art of Living founder’s Nobel Prize controversy, Twinkle had tweeted, “Sri Sri got his nobel foot and half his beard stuck in his mouth in a yogic pose.” She later deleted her tweet and apologised to Ravi Shankar’s followers as she wrote, “Didn’t mean to hurt anyone’s feelings was meant to be a joke and am old enough to accept an error of judgement on my part.” But the international director of AOL took a dim view of her tweet and tagged Twinkle while issuing her a threat, “Error of Judgement or Fear of #BoycottHousefull3. Anyway Being Old & Being wise is different thing.” Twinkle had replied, “Art of living teacher practising Art of intimidation?