Bloomsbury India is facing widespread condemnation from activists for its decision to publish a book written by pro-Hindutva individuals on the anti-Muslim pogrom of Delhi that killed 53 people, mostly Muslims. This was after it emerged that former AAP MLA, Kapil Mishra, has been invited as the chief guest for the book launch event. 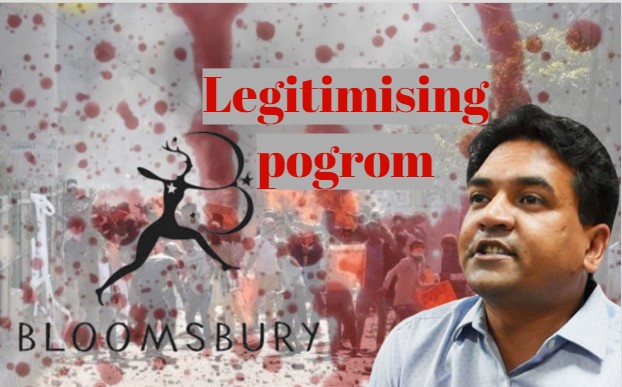 According to the media invite, the book, Delhi Riots 2020- The Untold Story, has been authored by Monika Arora, Sonali Chitalkar and Prerna Malhotra. Arora took to Twitter to write, “How Jehadi-Naxal lobby planned & executed. ‘Delhi Riots-The Untold Story’ Book launch on 22 Aug at 4 pm.”

From the language of the tweet by one of the authors, it’s clear that the authors have decided to hold Muslims responsible for the pogrom that saw dozens of innocent Muslims being killed for days in India’s national capital. Other two guests invited for the book launch include right-wing filmmaker Vivek Agnihotri and editor of pro-Hindutva fake news blog page OpIndia.

As expected, Bloomsbury began to face international outrage for its decision to what many said legitimised the anti-Muslim religious pogrom.

Activist Saket Gokhale wrote, “Publisher @BloomsburyIndia is releasing a book which seeks to blame minorities for the Delhi Pogrom. Nupur Sharma of OpIndia & CRIMINAL KAPIL MISHRA OF BJP are guests of honor at the release. An int’l publishing house openly pushes sanghi communal agenda.” He ended his tweet with hashtag #BoycottBloomsbury.

Gokhale’s subsequent tweet read, “All authors across the world working with @BloomsburyBooks & @BloomsburyPub should know that their India division propagates fake communal propaganda & tries to justify a pogrom. To give a platform to hate speech in India while virtue signaling overseas is the new tactic.”

All authors across the world working with @BloomsburyBooks & @BloomsburyPub should know that their India division propagates fake communal propaganda & tries to justify a pogrom.

To give a platform to hate speech in India while virtue signaling overseas is the new tactic.

Similar sentiments followed from other activists and members of civil society.

@BloomsburyBooks do you know that @bloomsburyIndia
has published a book on the Delhi 2020 riots that places the blame on the victims? It criminalises the muslim community and seeks to dog whistle to the hindu majoritarian politics currently in India.

(Thread)@BloomsburyIndia is releasing a book on the Delhi Riots 2020 — and guess who the Guest of Honours are:

KAPIL MISHRA, the hate-monger and brain-child of goli maaron saalon ko (shoot the bastards) slogan, who explicitly called for violence against Muslims and Dalits. pic.twitter.com/bC2HoFlmSg

I wouldn’t spend another penny on their books. You shouldn’t too. https://t.co/HLaI16RuAL

Shame on you @BloomsburyIndia.
This is like publishing Hitler blaming Jews for Kristallnacht. @BloomsburyBooks @BloomsburyPub you shd know what your Indian counterpart is doing. https://t.co/UeuwI1YIAk

This is only appropriate in the new India. Well done @BloomsburyIndia. https://t.co/gLTzrpOuXQ

Shame on you @BloomsburyIndia
for publishing this Anti Muslim propaganda.

Delhi’s Muslims had faced state sponsored pogrom, and now they are publishing propaganda and inviting these hatemongers as Guest of Honour.

Journalist Suhasini Haider quoted a statement from Bloomsbury India, which denied its role in organising the book launch event. But the publishing house did not explain why it had chosen to commission a book, which criminalises Muslims for this year’s Delhi pogrom.