Sara Ali Khan had shared about her obesity as a teenager when she appeared on Koffee With Karan show last year with her Dad Saif Ali Khan. She had revealed how she weighed 96 kgs because of a symptom called Polycystic Ovarian Disease, commonly known as PCOD. The makers of the chat show had also played a small video clip of an overweight Sara Ali Khan as a child. 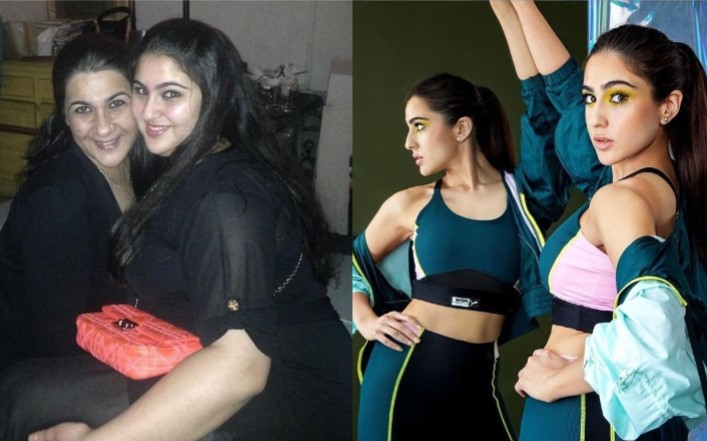 Sara on Wednesday took to Instagram to share a throwback photo with her mother Amrita Singh with a caption that read, “hrow? to when I couldn’t be thrown.” She also used emojis of pumpkin, burger, pizza, coke and doughnut among others to end her social media post.

Soon her timeline was flooded with comments from her peers and fans. One of the first one to comment was her rumoured boyfriend Kartik Aaryan, who wrote cheekily, “This girl looks like Sara Ali.” Actress Shraddha Kapoor appeared to be in awe of Sara because of her amazing transformation as she wrote, “What an amazing journey you’ve had!!! Hats off.” Actress Zareen Khan, who was recently body-shamed for her stretch marks after she too lost more than ‘50 kg of weight,’ asked, “Inch or pinch?”

Others too commented admiring Sara for her exceptional body transformation. One wrote, “Such an inspiration.” Many others agreed as they too also left flattering comments for the actress.

On Tuesday, Sara had shared several photos from her latest shoot and wrote confidently, “The question isn’t who’s going to let me; it’s who’s going to stop me⁉️ ”

Sara shot to fame with her debut Bollywood film Kedarnath opposite Sushant Singh Rajput before delivering another blockbuster Simmba within weeks with Ranveer Singh. She will next be seen in Love Aaj Kal 2 opposite Kartik Aaryan and Coolie No. 1 with Varun Dhawan.