BJP Spokesperson Sambit Patra’s attempts at taking a potshot at Congress President Rahul Gandhi backfired on Thursday, making him a subject of incessant trolling. This was after he poked fun at Gandhi’s press conference lasting for over 16 minutes by calling it the shortest news conference ever. 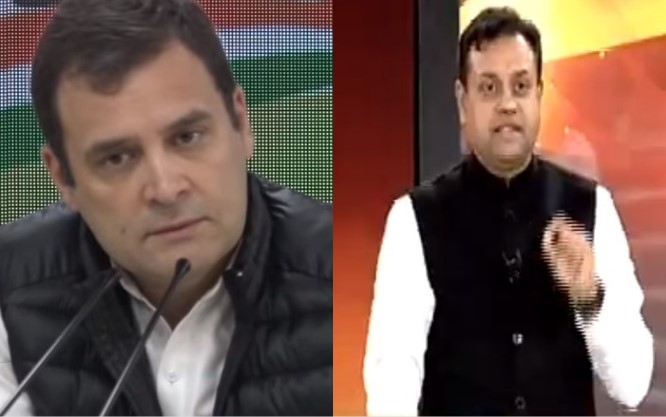 Gandhi had interacted with reporters on Thursday morning to discuss the stunning admission by the Narendra Modi government in the Supreme Court that documents related to the Rafale deal had been stolen from the ministry of defence.

Gandhi said that the government’s admission that files related to the Rafale deal had been stolen proved its culpability in the scam. He said, “Yesterday (on Wednesday) an interesting development took place. Media was warned of probe in the Rafale deal because files have gone missing. But, there will be no investigation against those who are accused of carrying out parallel negotiations in the Rafale deal. The government is manipulating institutions to save PM Modi.”

He said that the government’s admission that files were missing proved that ‘the documents are genuine and its clearly written in them that PMO was carrying out parallel negotiations.’

Gandhi’s allegations evoked angry reactions from several BJP leaders including Union Minister Ravi Shankar Prasad and his party colleague Patra. While Prasad accused Gandhi acuused Gandhi of indulging in lies and ‘inadvertently or deliberately playing into hands of Rafale competitors,’ Patra took to Twitter to mock him for conducting ‘the shortest press conference.’

He wrote, “Rahul Gandhi is out to set a Guinness/Limca book of World record of holding the shortest Press Conference(rather Comedy Show) in the history of India! It was a under 1minute PC In front of the “Lengths” of Achievements of Sh Modi the “brevity” of Rahul stands as stark contrast!”

Rahul Gandhi is out to set a Guinness/Limca book of World record of holding the shortest Press Conference(rather Comedy Show) in the history of India!
It was a under 1minute PC
In front of the “Lengths” of Achievements of Sh Modi the “brevity” of Rahul stands as stark contrast!

He repeated the same jibe when he appeared on TV channels later in the day. However, Patra’s comical take at the Gandhi’s press conference did not go down well since it smacked of glaring factual inaccuracies. Contrary to his claims of Gandhi’s press conference lasting for one minute, the Congress president was in conversation with reporters for over 16 minutes. Angry social media users soon began to incessantly troll the controversial BJP spokesperson with reminding that his boss, Prime Minister Narendra Modi, had yet to address a single press conference despite being in office for five years.

Hey dumbo, that was his 875466th open PC. Your daddy hasn’t given an open one since the time you were conceived.

Pity Rahul could not break Modi’s Guinness/Limca Book of World record of the shortest press conference lasting 0 seconds….some records are impossible to beat…#ModiHaiToMumkinHai

Ask @narendramodi to have a press conference and take questions.

In #NewIndia u have created a new trend of having a pc without taking questions.

Noo sambit ji you got it wrong this time, the shortest is our beloved PM’s, 0 minutes, no PC in 5 years. Our PM is great, breaking record after record.@imprakrut @priteshradadiy2 @BJP4India @PMOIndia

On Wednesday, the Modi government had sensationally told the Supreme Court that the documents on Rafale deal relied upon by petitioners were stolen from the defence ministry. Attorney General KK Venugopal had gone to the extent of saying that the media houses responsible for exposing financial irregularities in the Rafale deal by relying on the stolen documents should be booked under contempt of court.