Filmmaker Rohit Shetty became the target of incessant trolling on Thursday for agreeing to change the scheduled released date of his film Sooryavanshi to accommodate Salman Khan’s next Eid release Inshallah. While his decision earned him plenty of accolades from Salman himself, netizens, mostly BJP supporters, appeared incensed as they trended ‘Shame on you Rohit Shetty’ on Twitter. 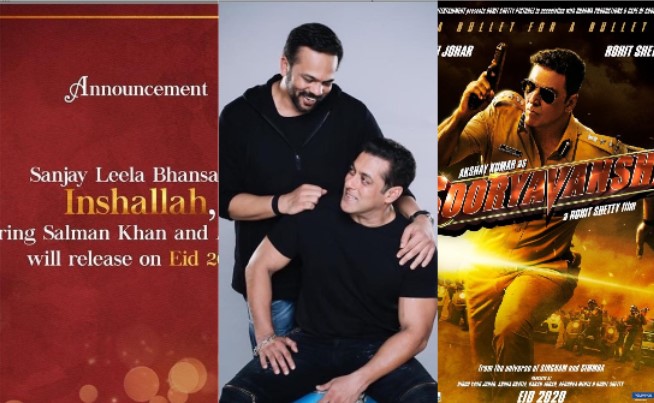 Salman recently announced his next collaboration with Sanjay Leela Bhansali for Inshallah, also featuring Alia Bhatt. The film will be Salman’s next Eid release since he’s known to have his big project scheduled for release during the Muslim festival. Alia had taken to Instagram to announce, “Agli Eid, Inshallah.”

Rohit too had announced that his next big project Sooryavanshi starring Akshay Kumar will hit cinemas during the next year’s Eid. But after Salman announced the date of his film, Rohit reportedly agreed to change the release date to 27 March, at least two months before the originally announced date. Salman took to Twitter to thank Rohit for his kind gesture. He wrote, “I always thought of him as my younger brother and today he proves it… #RohitShetty Sooryavanshi releasing on 27th March, 2020.”

Rohit replied on Instagram, “You can Compete with the World but Not with your Family…See you soon Chulbul Pandey!!!”

#Repost @beingsalmankhan with @get_repost ・・・ I always thought of him as my younger brother and today he proves it… @itsrohitshetty Sooryavanshi releasing on 27th March, 2020. . . . You can Compete with the World but Not with your Family… See you soon Chulbul Pandey!!!?

While Salman and Rohit displayed extraordinary camaraderie, Twitter trolls, mostly supporters of Akshay Kumar, who’s viewed as pro BJP, did not react kindly to Rohit’s decision to change the date of his film.

SHAME ON ROHIT SHETTY
The message is loud and Clear – We want Sooryavanshi on EID 2020 , No compromise with anyone pic.twitter.com/HmzzyBeeD1

Salman Khan’s this year’s Eid release Bharat has smashed box office records with the film already having collected more than Rs 200 crore within the first 10 days of hitting cinemas.