In a huge relief to popular comedian Bharti Singh of The Kapil Sharma Show, a Mumbai court on Monday grants her bail with husband Haarsh Limbachiyaa just days after their arrest in a drug racket case. Both were earlier arrested by the Narcotics Control Bureau before being sent to judicial custody by a court in Mumbai. 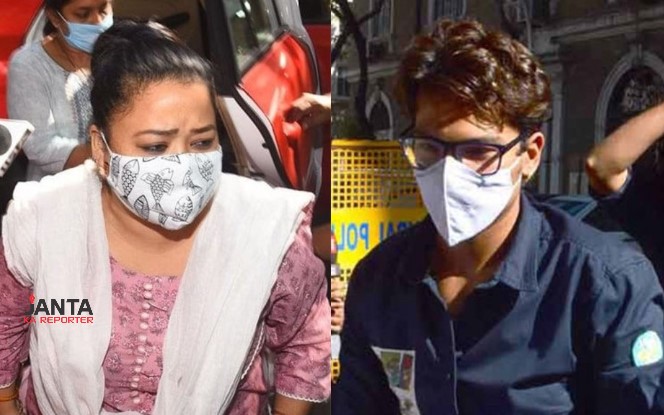 On Monday, Additional Chief Metropolitan Magistrate at Esplanade Court granted both of them bail subject to furnishing bail bond of Rs 15,000/- each. While lawyer Ayaz Khan appeared on behalf of Bharti and her husband, surprisingly there was no alwyer present in the magistrate court on behalf of the NCB.

Khan, according to the Bar and Bench website, argued that the banned substance recovered from the couple’s premises was small in quantity and the punishment for which was less than one year. He referred to at least two previous orders passed by another magistrate of the same court explaining that bails were granted in cases where the punishment of the offences was for less than a year.

Bharti and her husband were arrested on Saturday after the NCB raided their house and office, recovering around 85 grams of ganja.

Many had linked their arrest to the mocking of Arnab Goswami on The Kapil Sharma Show by Bharti’s co-stars, Krushna Abhishek and Kiku Sharda.

Bharti had recorded the Grand Finale episode of India’s Best Dancer, which was broadcast on Sony TV on Sunday night. However, her time in judicial custody would have severely affected her TV commitments.

The 36-year-old comedian from Punjab is a hugely popular entertainment celebrity, while her husband from Gujarat is a well-known scriptwriter and TV host. Reacting to their arrest, comedian Raju Srivastava had said that while Bharti was also a culprit, the anti-drugs agency must not target small artists and should aim to break the supply chain.