Shloka Mehta and mother-in-law Nita Ambani were the star attractions of Friday’s NBA India Games red carpet. Also present on the occasion were Shloka’s husband Akash Ambani and to-be sister-in-law Radhika Merchant. There was also a heavy presence of Bollywood stars during the launch of the first-ever NBA match in India. 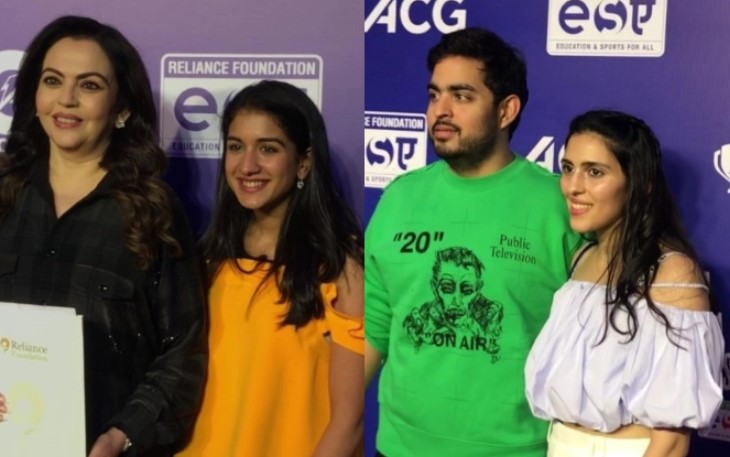 Dressed in a longline black and grey-checked shirt paired with black jeggings and black high heeled strappy sandals with hair in soft curls, Nita Ambani presented the ceremonial match ball to NBA officials ahead of the game.

Radhika, on the other hand, was seen making her own style statement in a mustard off-shoulder top with dark blue jeans as she posed for the camera with her to-be mother-in-law Nita Ambani.

Reliance Foundation chief Nita Ambani said that it was her dream ‘to see India becoming a truly multi-sport nation.’ She also thanked the NBA to partner with her foundation for the last six years on the Reliance Foundation junior programme.

“It’s my dream to see India becoming a truly multi-sport nation.” – Mrs Nita Ambani at the first #NBAIndiaGames between @SacramentoKings & @Pacers, where she thanks @NBA for partnering with #RF over the last 6 years, for the #RF Jr. NBA program. #RelianceFoundation #RFESA #RFNBA pic.twitter.com/1mR16ZFToR

Nita Ambani said, “The stadium full of children that you see today are all from the Reliance Foundation through their NBA programme. It’s my mission to promote sports and education in India. I hope to see India to the pinnacle of global sports.”

Ahead of the inaugural NBA match, Youtube sensation Bhuvan Bam performed the National Anthem of India, while Mumbai’s underground rapper Kaam Bhaari enthralled the audience with his performance.