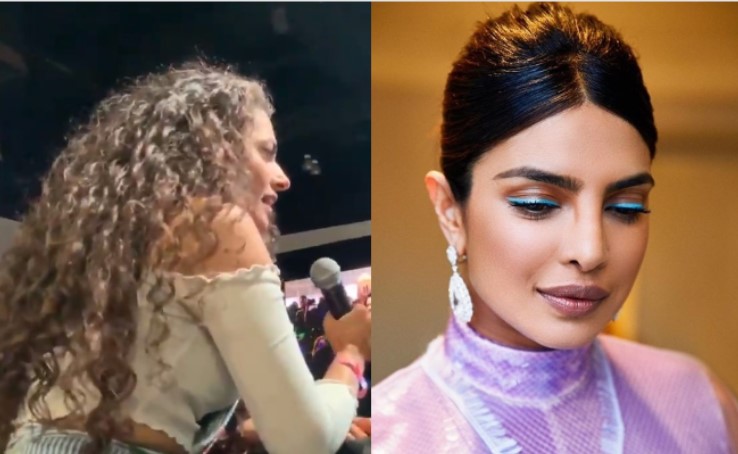 In the video, Malik is seen posing her question by declaring the famous Indian actress a hypocrite. She declared, “It was kind of hard hearing you talk about humanity, because as your neighbour, a Pakistani, I know you’re a bit of a hypocrite.” She then referred to a tweet posted by Priyanka in February, when she, according to the woman in the video, promoted nuclear war between the two hostile south Asian countries. “You tweeted on 26 February ‘Jai Hind #IndianArmedForces.’ You are a Unicef Ambassador for Peace. And you are encouraging nuclear war against Pakistan. There’s no winner in this. As a Pakistani, like millions of people, have supported you. You have no business in calling for a nuclear war.”

Priyanka Chopra tweeted during a time when we were this ?? close to sending nukes to one another. Instead of advocating for peace she tweeted in support of the Indian army pic.twitter.com/LhbMkOW59v

It was at this point that the organisers snatched the mic away from the woman. Priyanka, who is now married to US pop star Nick Jonas, replied, “I hear you. Whenever you’re done venting. Got it? Done? Okay, cool.” Priyanka said that war was not something that she was really ‘fond of’ but she was ‘patriotic.’ “I think that all of us have a sort of middle ground that we all have to walk.”

“Whenever you’re don’t venting”. Sorry, didn’t realize that speaking on a humanitarian crisis was “venting” pic.twitter.com/OqCLgjDNa1

She added, “The way you came at me right now, girl, don’t yell. We’re all here for love. Don’t yell. Don’t embarrass yourself.”

India and Pakistan have fought several wars over the issue of Kashmir. The two countries have recently expelled each other’s ambassadors after India revoked Article 370 on Jammu and Kashmir.