BJP spokesperson and the party’s candidate from Puri parliamentary seat, Sambit Patra, on Sunday shared a video of his meal with a poor family in the constituency. However, the video has now exposed the claims made by Prime Minister Narendra Modi on the success of Ujjwala scheme. 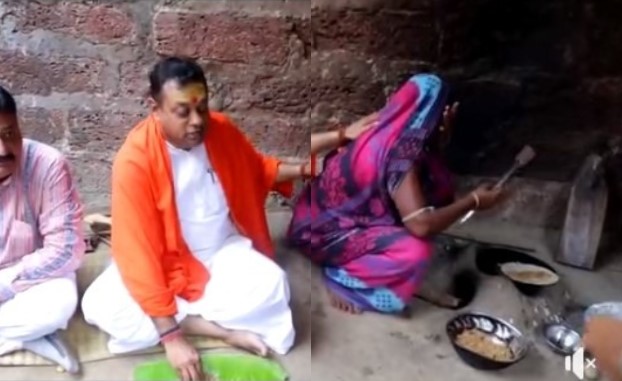 While posting the video, Patra wrote in Hindi, “This is a poor widow living in a small village in Puri. She has three daughters including two with disabilities and a son. Mr Narendra Modi has helped this mother get a house.”

His subsequent social media post read, “This is my own family. This mother cooked the meal and fed me. I too fed her with my own hands. And I believe that serving her is the biggest worship of God.”

In the video, Patra can be seen enjoying his meal on a banana leaf. The woman, described as the widow by Patra in the video, too can be seen cooking the meal using firewood. Journalist Prashant Kumar, who spotted Patra’s post first asked, “Weren’t we told that Ujjwala Yojana was a smashing success and that mothers and sisters of poorest of poor have got gas cylinders at their homes? Can’t spot a gas cylinder here atleast. Reaction?”

Weren't we told that Ujjwala Yojana was a smashing success and that mothers and sisters of poorest of poor have got gas cylinders at their homes?

Modi, in his election rallies have often claimed that women in villages would be forced to cook food amidst billowing smoke because of their lack of access to gas stoves, adding that his Ujjwala scheme had ended their ordeal. Addressing an election rally in Odisha on Saturday, Modi had once again repeated his claims stating that his government had been  ‘able to provide’ gas connections to ’40 lakh houses under the Ujjwala Yojana’ in the state.

Last year, while interacting with a group of beneficiaries of his Ujjwala scheme, Modi had said, “When I was young and my mother would be cooking, we remember the smoke. I also remember the pain she took so that we, her little children would not be able to inhale the smoke.”

It seems, Patra’s latest video, aimed at wooing Puri’s poor voters, appears to have backfired spectacularly. What’s ironical here is that the Union Petroleum Minister Dharmendra Pradhan hails from Odisha and he’s being projected as the next chief minister of Odisha in the event of the BJP’s victory in the assembly polls. Patra himself is a director in the government-run Oil and Natural Gas Corporation Gas Limited, also known as ONGC.