Oscar-winning music composer AR Rahman on Friday congratulated Prime Minister Narendra Modi for securing a landslide win in the Lok Sabha polls. However, many of his followers detected a tinge of sarcasm in his social media post. 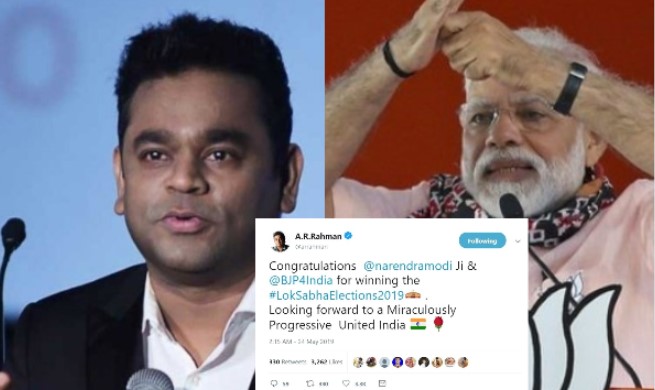 Many eagle-eyed on Twitter were quick to highlight that the legendary music maestro had in fact trolled Modi for his divisive policies as the latter’s election campaign was believed to have been based on the politics of polarisation. One user wrote, “Miraculously Progressive United India” Between the lines; He just means progress & unity was missing in the past 5 years!”

Another user wrote, “‘miraculously” you are apt with your words, rahman.” “‘Miraculously progressive’ these two words just said it all what Rahman sir’s reaction is n also the majority of the citizens who actually think democracy has been destroyed in this country.. So true words from Rahman sir,” wrote another user. Another wrote, “You are right. With the likes of Pragya Thakur and HEMA Malini winning, we need nothing short of a miracle to make progress. India deserves better than both BJP or Congress but we live in unfortunate times.”

Modi’s divisive politics had received global media attention when the Time magazine called him ‘Divider in chief’ in its cover right in the middle of the campaign. Modi also faced flak for defending his decision to field a terror accused Sadhvi Pragya Thakur from Bhopal, where she defeated veteran Congress leader Digvijay Singh on Thursday.