On September 2, Mukesh and Nita Ambani welcomed the who’s who of Bollywood and the world of sports and politics for this year’s Ganesh Chaturthi festival at their official residence Antilia, situated at south Mumbai’s 39, Altamount Road. As celebrities began to arrive amidst a heavy downpour, the waiting paparazzi desperately looked for Shloka Mehta, Akash Ambani, Radhika Merchant and Anant Ambani to arrive for the photo-op. However, they were left disappointed when Shloka Mehta did not come out to pose for the camera. Nita Ambani made two appearances, first with Radhika Merchant before obliging photographers by posing with daughter Isha. 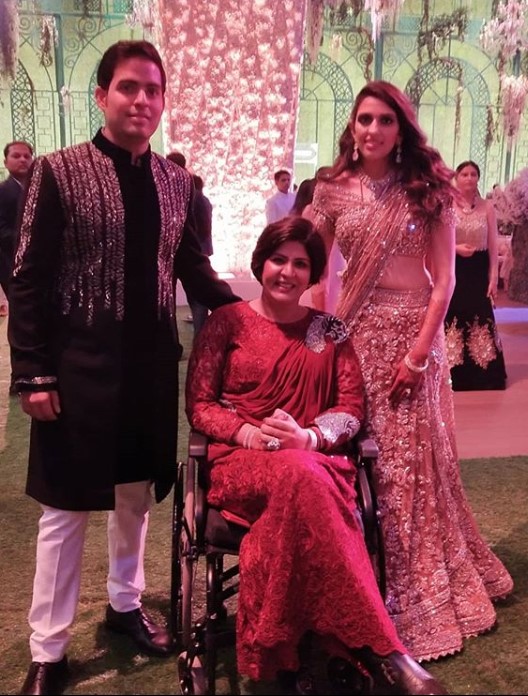 This was the first Ganesh Chaturthi festival by the Ambanis since their daughter Isha and son Akash married Anand Parimal and Shloka Mehta respectively. Although, rarely has Shloka been seen without her mother-in-law since becoming the daughter-in-law of Asia’s richest family, she was seen performing the aarti at a distance from Nita Ambani. This prompted many to conclude that Radhika, the to-be bahu of the Ambani family, had effectively stolen the limelight from Shloka for the first time since March when the latter tied the knot with Akash.

While many wondered where Shloka was, a new photo from the Ganesh Chaturthi  celebration at Antilia has shown the Ambani daughter-in-law meeting Deepa Malik, who became the first Indian woman to win a medal at the 2016 Paralympics Games. More recently, Deepa was conferred with the highest sporting award, the Rajiv Gandhi Khel Ratna by President Ram Nath Kovind.

Such a beautiful picture of the beautiful ladies ?❤❤ #ShlokaMehtaAmbani with the Great Indian Athlete #DeepaMalik for the #GanpatiCelebrations at #Antilia last night #Ganpati2019 ✨?? . . #ambani #ganeshotsav #ShlokaMehta

A post shared by Shloka Ambani Encyclopedia (@shlokaakashambani_fp) on Sep 3, 2019 at 3:05am PDT

In the photo, now gone viral, Shloka is seen posing for the camera alongside Deepa Malik while holding her Khel Ratna medal. Dressed in a pink and golden embellished lehenga choli, Shloka once again looked elegant. The photo, when shared by one of Shloka Mehta’s fan pages on Instagram, evoked plenty of positive reactions from her fans with many declaring her ‘beautiful’ and ‘amazing.’

This is not the first time Deepa has been invited to an Ambani party. She was one of the guests at the wedding of Shloka and Akash in March this year. In her Instagram post, she had expressed her profound gratitude to Nita Ambani for looking after her. Her post had read, “Blessings to the newly weds @aambani1 & @shloka11 and gratitude to Nita Ambani ji for personally taking care of every detail of my special needs as a wheelchair user ,to make me comfortable. The hospitality and warmth is par excellence.”

Blessings to the newly weds @aambani1 & @shloka11 and gratitude to Nita Ambani ji for personally taking care of every detail of my special needs as a wheelchair user ,to make me comfortable. The hospitality and warmth is par excellence. #akashambani #shlokamehta #Ambaniwedding #Paralympian #Paraathlete #abilitybeyonddisability #nitaambani #bigfatindianwedding #wedding #bollywood #ootd

It was clear that both Shloka and Deepa enjoyed personal camaraderie and this was one of the reasons why she had chosen to carry the Rajiv Gandhi Khel Ratna medal to show it to the Ambanis.