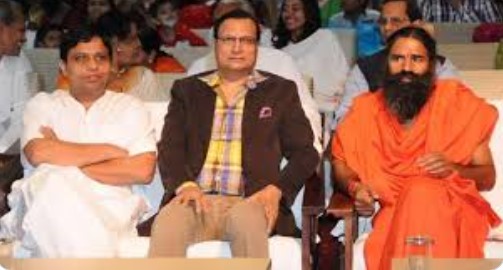 Even though Sharma claimed in his tweet that the WHO had approved Ramdev’s Coronil, his report presented no evidence to substantiate his claims. His report merely said, “One significant and positive news is that Coronil, a mix of Ayurvedic medications to prevent Coronavirus infection, manufactured by Swami Ramdev’s Patanjali group, has received AYUSH certification as per WHO norms.”

Sharma’s ‘Ramdev’s Coronil gains acceptance from WHO’ claim in tweet changed to ‘it has now received certification from the AYUSH ministry as per WHO norms’ in his report. He wrote, “According to CoPP certification, Coronil tablets can now be exported to 158 countries. It allows the WHO to inspect the manufacturer ‘at suitable intervals’.”

Sharma’s stunning claims without any evidence evoked angry reactions from journalists and activists as they demanded Twitter to ban the India TV founder’s social media account. Others tagged the WHO to take note of ‘fake news’ peddled by Sharma on a matter as serious as the COVID-19 pandemic.

Dear @TwitterSafety this is grossly #misleading promotion of a so called drug related to #COVIDー19 . @WHO never approves any medicine. This handle with 7.2 million followers is spreading fake news. #रजत_शर्मा_कागज_दिखाओ https://t.co/C9ibk4pPp3

Has WHO approved “Patanjali Coronil” as a medicine for Covid as claimed by Indian Media?@WHO or @MIB_India Please clarify before this report spreads, before our people starts believing & something tragic takes place. We doubt, they’ve Fooled Folks before. #रजत_शर्मा_कागज_दिखाओ pic.twitter.com/YQ2pWAOnay

WHO didn’t give approval Coronil vaccine. Fake news is spreading by Rajat Sharma.

Neither the Government of India nor @WHO has considered coronil as a drug of corona.Coronil is just an immunity booster, like Chwenprash. Brahmins have been shining their business with fake writings. @RajatSharmaLive #रजत_शर्मा_कागज_दिखाओ pic.twitter.com/7trwDFfYPg

Patanjali’s Managing Director, Balkrishna, took to Twitter to clarify that there was no truth in the claims on Coronil being approved by the WHO. He tweeted, “We want to clarify to avoid confusion that our WHO GMP compliant COPP certificate to Coronil is issued by DCGI, Government of India. It is clear that WHO do not approve or disapprove any drugs. WHO works for building a better, healthier future for people all over the world.”

But the controversial TV anchor has not retracted his claim about Patanjali receiving approval from the WHO on Coronil.

One wonders if Sharma is aware of the adverse implications of his fake claims on millions of people battling the COVID-19 pandemic. More than 1.5 lakh people have lost their lives to coronavirus in India. People are visibly frightened and desperate to protect themselves from the deadly virus. Such misleading claims would have a catastrophic effect on people’s lives.