The National Commission for Woman has summoned Mahesh Bhatt, actress Esha Gupta, Mouni Roy, Urvashi Rautela and others to record statements in a separate case of sexual exploitation. This was after activist Yogita Bhayana tagged the NCW while sharing an audio conversation of a promoter with an aspiring model. 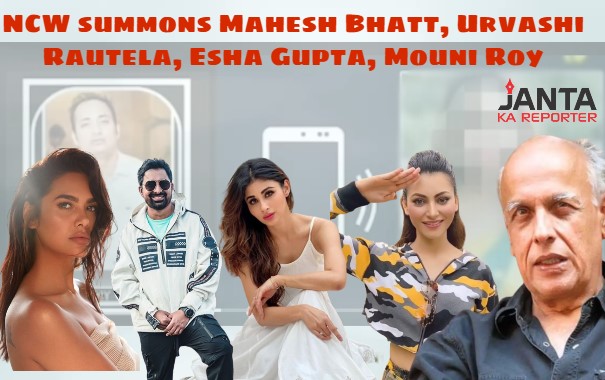 NCW Chairperson Rekha Sharma took to Twitter to summon Bhatt, Esha, Urvashi, Mouni, Rannvijay Singha and Prince Narula to record their statement. Sharma wrote, “Issued a notice to @MaheshNBhatt, @UrvashiRautela, @eshagupta2811, @rannvijaysingha, @Roymouni, @princenarula88
for recording of witness statements on a complaint received from Ms @yogitabhayana, Founder @pariforindia, alleging sexual and mental assault on several girls by Promoter of IMG Ventures, Mr Sunny Verma and his accomplice. Despite directing to appear before the Commission and intimating the same through all possible modes of communication, these people have neither bothered to respond nor attended the scheduled meeting.”

Sharma said that the NCW had taken serious note of their non-appearance. “The meeting has been adjourned to next date, ie, on August 18 at 11.30 AM. You will be sent formal notices again and non-appearance will be followed by action as per our procedures,” she added. 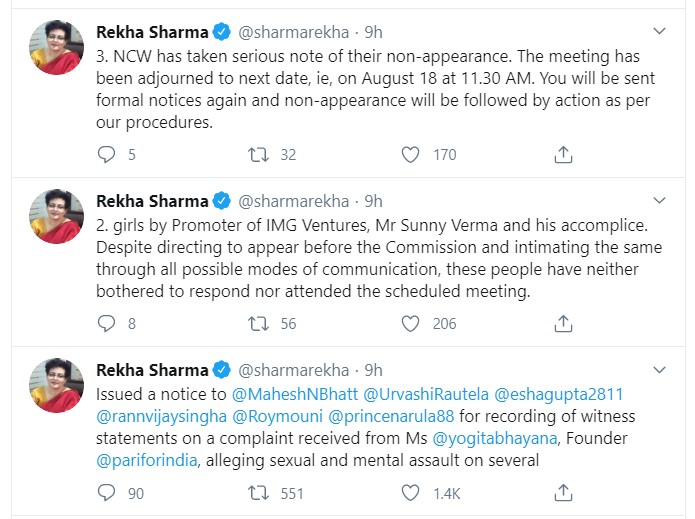 In the audio shared by Yogita, one Sunny Verma was heard forcing an aspiring model to agree for sexual favours in exchange for a prosperous career in the entertainment industry. When the girl asked what she was expected to do, the man in the audio was heard saying, “It’s simple. You will entertain me, I will push you up.”

The video shared by Yogita also showed several Bollywood actors including Sonu Sood, Urvashi Rautela, Esha Gupta and Mouni Roy endorsing a beauty pageant event promoted by Sunny Verma. When a user asked why the NCW had not summoned Sonu Sood, Rekha Sharma wrote, “He did come back to us and Cooperating.”

He did comeback to us and Cooperating. https://t.co/VypnKdgHAu

Actress Esha objected to the NCW publicly summoning her as she wrote, “Respected ma’am, @sharmarekha, as a woman, I would stand by any woman who has been wronged. But if no information has reached to us,then why is my name dragged here. I am ready to cooperate and not ashamed, hence making it public here.” She also tagged Union Minister Smriti Irani in her tweet.

Sharma replied, “Esha we are only saying we want to inquire and because you were part of a campaign for the company in question, we will be asking few questions. My office emailed you and others on Id available on net.”