Salman Khan on Saturday night lashed out at Bigg Boss contestants Rubina Dilaik and Jasmin Bhasin for mocking Arshi Khan and Rakhi Sawant on separate occasions. Salman’s public rebuking of Rubina and Jasmin triggered a full-blown controversy as their fans reacted with anger accusing the Bollywood megastar of unfair treatment. What had angered Salman was Rubina showing her little finger to Arshi. Salman was also incensed with Jasmin’s decision to make fun of Rakhi’s cosmetic surgery. 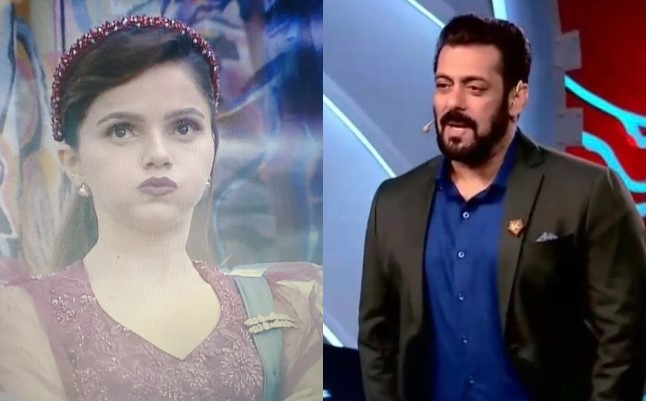 Salman slammed Rubina for using a little-finger gesture towards Arshi, calling her action demeaning. Arshi felt that Rubina was essentially trying to insult the former by equating her to peeing. Salman, however, felt that Rubina’s intention was to show her middle finger to Arshi but she had changed her mind to use her little finger to avoid wrath from her fans.

“I think anybody who puts others down is the most uncool or uncouth person to me. Abhinav, I think you should take a stand now. This is the time for you to be husband.”

Salman also lashed out at Jasmin for mocking Rakhi’s plastic surgery. Jasmin was made to apologise for her action.

The genesis of the controversy was an incident on the eve of the New Year when Sonali Phogat and Arshi Khan were seen speaking to each other even after the lights were turned off. Jasmin had taken objection to their action and threatened to not cook for the rest of the housemates since she was responsible for the kitchen duty.

When asked by Jasmin to not poke Arshi, Rubina had cast aspersion at Arshi by describing her as a person from a different ‘category.’

Pained by Salman’s public rebuke for his girlfriend, Aly Goni lost his cool at Jasmin for not paying heed to his advice earlier. Aly was later engaged in a fight with Vikas Gupta accusing him of inciting violence in the house.