Veteran BJP leader LK Advani on Sunday fondly remembered how Lata Mangeshkar recorded a signature tune for his infamous rath yatra in 1990. Advani’s rath yatra had led to countrywide anti-muslim riots leading to his arrest in Bihar’s Samastipur by the then Chief Minister Lalu Prasad Yadav. 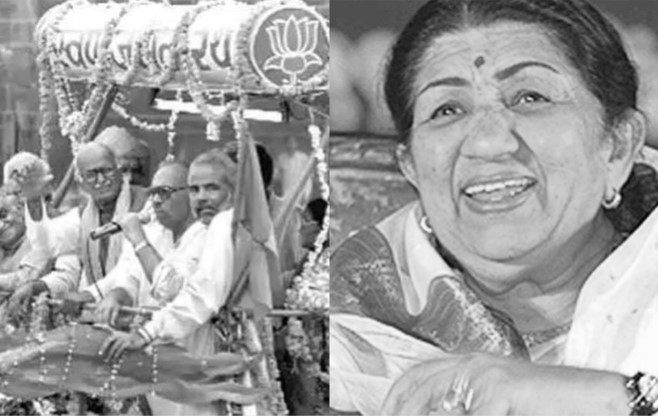 According to news agency PTI, 94-year-old BJP leader said that Mangeshkar ‘will continue to inspire many generations of music lovers.’
Recalling his association with the famous Bollywood singer, Advani said, “Lata ji has been my all time favourite among popular singers and I feel fortunate to have shared a long association with her. I recall the time when she recorded a beautiful Shri Ram Bhajan and sent it to me when I was about to undertake my Ram Rath Yatra from Somnath to Ayodhya.”

The rath yatra helped the BJP polarise Hindu votes in support of a Ram Temple in Ayodhya in place of Babri Masjid. Advani and his supporters later demolished the Babri Masjid two years after his infamous rath yatra. This also had a profound effect on BJP’s electoral fortunes as the Hindutva party’s representation in the parliament increased from two to over 80.

Mangeshkar died at a Mumbai hospital at the age of 92 on Sunday. She was known for her support for the BJP and its Islamophobia. This made her a target of incessant attacks from India’s liberals.