Republic TV founder Arnab Goswami has often faced condemnation for turning what used to be known as TV journalism in India into a joke. But, he took his own rapidly falling reputation to a new low last week when he moderated a TV debate with two of his panelists regaling the audience with childish theatrics. The two panelists were Maninderjeet Singh Bitta from India and Engineer Iftikhar Chaudhry from Pakistan. Bitta heads a little known outfit called All-India Anti-Terrorist Front, while Chaudhry is a senior functionary in Pakistani PM Imran Khan’s party, Pakistan Tehreek-e-Insaf. 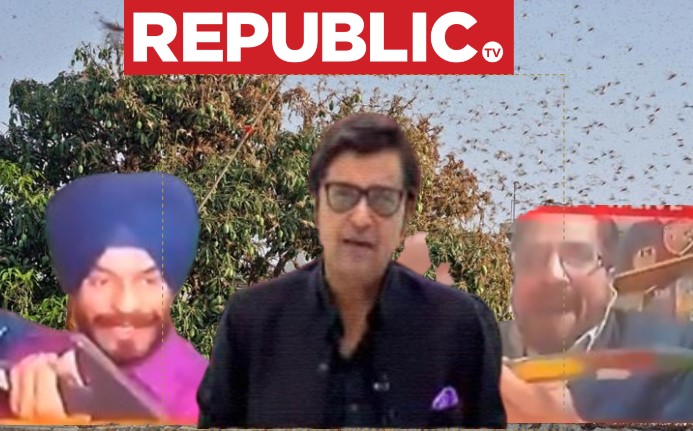 In the viral video, both Bitta and Chaudhry could be seen threatening to attack each other with their own weapons of ‘mass destruction.’ Bitta brandished both a spear and a dagger to intimidate the Pakistani guest on Goswami’s show, while Chaudhry used a model of a missile to launch a ‘counter-attack.’ The disgraceful display of shenanigans on LIVE TV by two guests did not bother Goswami a bit as he remained busy moderating his prime time debate show. The video, which has now gone viral, was a perfect example of just how deep a pit has the Republic TV founder has fallen into. This also came as a testament to Goswami’s unfortunate transformation from an erstwhile journalist into a court jester.

Is this journalism or someone trying to make tik-tok videos.

Arnab Goswami should be ashamed , if calls himself journalist after broadcasting these stupid things !!#Republictv

No, it is not a comedy show, but Arnab Goswami’s prime time news debate pic.twitter.com/RZOPlv36TH

Frankly this video is not funny to me. degradation of debates on issues of national& border security to this spectacle is despicable. Aftr converting nation’s security into a national circus, I am amazed that #ArnabGoswami claims this as nationalistic journalism. SHAME! https://t.co/XfKEpnQJiZ

This wasn’t the only cringe-worthy show that Goswami was busy showcasing in the garb of journalism last week. In another programme, the former journalist launched a tirade against the Congress party for the alleged occupation of Indian territories by the Chinese forces in Ladakh. He even launched a Twitter hashtag #ChinaCongress to slam India’s main opposition party for the failure of the Indian government led by Prime Minister Narendra Modi to keep the country’s border secure. Had Goswami not abandoned his profession as a journalist, one would have deemed it appropriate to grill him for not holding the Indian government accountable for its spectacular failure to prevent the border dispute with China. But, as is now a well-established fact, Goswami divorced the profession that gave him considerable fame long ago.

Arnab is blaming Pakistan for locusts in India. Yes, you read that right pic.twitter.com/gCeVAOWmf7

And if you thought the Republic TV founder had exhausted all his stupidity while regaling his audience with comical guests from India and Pakistan and sharpening his knife against an opposition party for the incompetency of the government, you were wrong. Goswami appeared to have saved the best for the last. In another so-called TV debate, he asked with all seriousness, “India is asking if Pakistan is conspiring against India with the help of locusts?” In other words, Goswami blamed Pakistan for the recent menace of locusts affecting the population in Rajasthan. He also asked if Pakistan was preparing ‘locust biryani.’

His rants left little doubt in anybody’s mind about who’s been inspiring him these days in carrying out his ‘journalistic endeavours.’ His brand of journalism has ‘WhatsApp University’ imprinted everywhere as a single source of Goswami’s inspiration.