Deepika Padukone has taken to Instagram to accuse Katrina Kaif of plagiarism as the Padmaavat actress said that the latter had stolen her idea. Her stunning allegations ( made in good humour) came as she shared a video of Katrina doing the dishes after being forced to live in self-isolation. Her ‘accusation’ drew an instant response from Katrina Kaif. Their camaraderie conclusively proved that they have mended fences since Katrina was widely believed to be the reason for Deepika’s split with Ranbir Kapoor many years ago. Ranbir is currently dating Alia Bhatt. 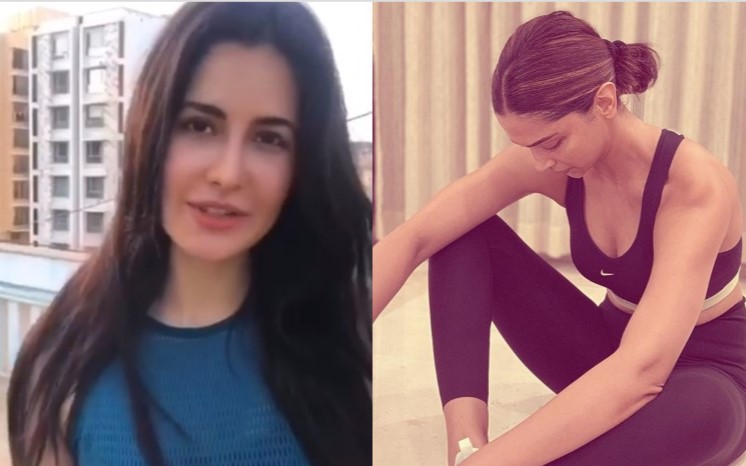 This all started with Katrina sharing a video of herself doing the dishes since all domestic help going on leave after the nationwide lockdown to contain the spread of the coronavirus. Sharing the video, Katrina wrote, “? +?=?? really makes u appreciate all the help we have at home #socialdistancing #staysafe #helpoutathome.”

? +?=?? really makes u appreciate all the help we have at home #socialdistancing #staysafe #helpoutathome

Katrina followed it up with another video where she was seen sweeping the floor.

Day 21 ?-One day at a time guys…….we all gotta do our part ?…….. m apparently @isakaif part is to give commentary and pro tips while seated ? Gotta mix it up ….. this is seriously good exercise btw #stayhome #helpoutathome

However, Deepika posted Katrina’s video of doing the dishes on her Instagram page as she wrote, “I regret to inform you that Season 1:Episode 5 stands cancelled because @katrinakaif stole my idea!Hmmff!!!???‍♀️??? #PlagiarismInTheTimeOfCovid19

I regret to inform you that Season 1:Episode 5 stands cancelled because @katrinakaif stole my idea!Hmmff!!!???‍♀️??? #PlagiarismInTheTimeOfCovid19

This was in reference to Deepika ‘Productivity in the time of COVID-19.’ Within hours of Deepika sharing Katrina’s video, the latter reacted, “Hahaha ……Got the rights from Rupali my trusted aide (and house staff )Haha ?stay safe …. love u guys.” 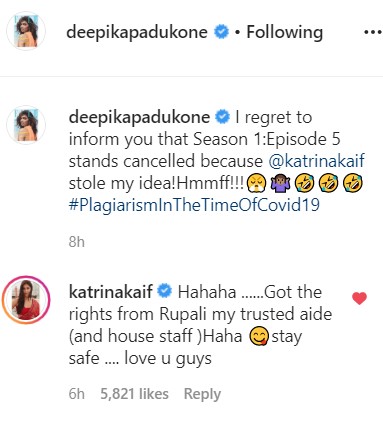 According to a report by India Today, Ranbir and Deepika began dating in 2007 when the two were working on their debut films, and their love blossomed on the sets of their 2008 film Bachna Ae Haseeno. However, the rosy picture ended quite soon. Deepika caught Ranbir cheating on her with Katrina Kaif. This led to her split with Ranbir.

Deepika went on to marry Ranveer Singh, while Ranbir is rumoured to be dating Alia Bhatt. Alia had recently confirmed that she was still dating Ranbir after some reports claimed that the two had split.