The shooting for The Kapil Sharma Show has stopped following the national lockdown to contain the spread of coronavirus in India. Sony TV has returned to air the old episodes of its famous comedy show. This Saturday, Sony TV aired an old episode of The Kapil Sharma Show featuring Shahid Kapoor and Kiara Advani. The show left the audience in splits after Kapil decided to confront Kiara about her friendship with Isha Ambani, the daughter of Mukesh and Nita Ambani. His probing questions led him to inquire about the wealth of the Ambanis and if Isha and her other prominent members of the Ambani family such as Akash and Shloka Mehta threw their clothes away after wearing them once. 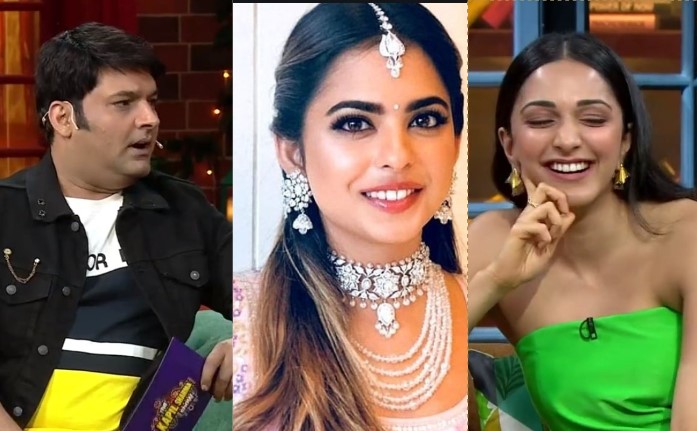 Kapil began his conversation with Kiara by asking, “Kiara, we’ve heard that Mukesh Ambani ji’s daughter Isha Ambani ji is your friend? Is it true?” Kiara replied, “Yes.” Overwhelmed by Kiara’s reply, Kapil said, “Wow. What can I ask you then?”

Kiara said that she had known Isha since childhood, adding that this friendship was special. Kapil sought to know if Kiara had seen Isha’s house from inside as he asked jokingly, “Do you need a visa to go there or it’s given on arrival?”

A visibly nervous Kiara said, “You are going to land me in trouble.” Kapil assured her that there was nothing for her to worry about. Shahid intervened and said, “On what channel is this show going to be telecast?” This was in reference to Kapil’s earlier show on Colors TV, which is owned by Mukesh Ambani.

Kapil said, “I used to do a show. So I asked them (Ambanis) to come to my show. I gave them the details of the show. They said, ‘that’s our channel.’ I said ok.”

Kapil asked Kiara if it was true that the Ambanis did not shake their clothes because they fear that money will fall off them. His question left Shahid Kapoor in splits while Kiara struggled to find a suitable reply to his question. Shahid had the best reply to that question, “Wherever they (Ambanis) shake their clothes, people must be waiting in anticipation and requesting them to do the same,” Shahid added.

Kapil’s next question about the Ambanis was, “It is said that they throw their clothes away after wearing them once. Any idea where they throw those clothes?” Kiara said, “No idea.” But Kapil wasn’t done yet as he asked, “If someone wants them (Ambanis) to adopt him, then what’s the procedure for that?”

Kiara asked if he was talking about himself, Kapil replied, “I want (Amabnis) to adopt both me and Archana Puran Singh.” Then addressing Archana, Kapil said, “Then we will not need to work Archana ji. Relax, eat and sleep. Wake up, relax, eat and then go back to sleep.”

Archana said that the Ambanis were working the hardest. To which Kapil said, “I agree, let them work hard so that we can relax.”

The Ambanis are the richest family in Asia. Mukesh and Nita Ambani’s daughter Isha is married to Anand Piramal, while their son Akash tied the knot with Shloka Mehta, who’s the daughter of billionaire diamond businessman Russel Mehta.

Both Akash and Shloka celebrated their first wedding anniversary last month. As for Isha, she was in the news after she hosted a lavish Holi party in March this year where several Bollywood actresses such as Priyanka Chopra and Katrina Kaif were in attendance.