Arnab Goswami of Republic TV has found himself at the centre of more embarassment as netizens took to Twitter with another shocking exchange from the alleged leaked WhatsApp chat between him and Partho Dasgupta, former CEO of BARC. In the new revelation, Goswami has been found to be allegedly accusing Kangana Ranaut of suffering from erotomania before declaring that the Queen actor had crossed the line by speaking against Hritik Roshan. 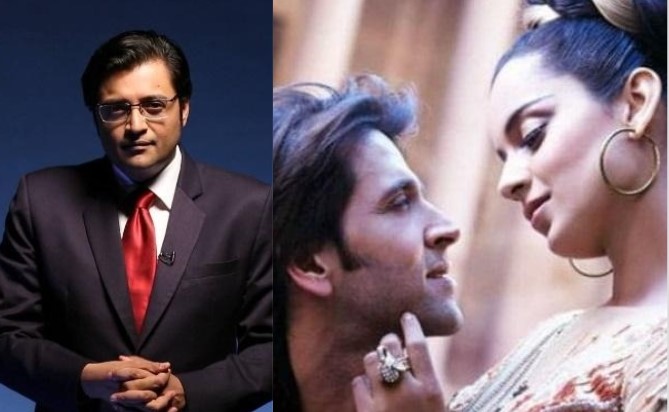 Dasgupta expressed his fears for Kangana saying that her career in Bollywood will be over now that she had decided to speak against powerful names. Agreeing with the ex-CEO of BARC, Goswami allegedly wrote, “She has crossed the line.” Goswami had added, “People are scared of her.”

As expected, netizens were quick to target both Kangana and Goswami on the latest revelation;

Arnab Goswami: “Kangana Ranaut is schizophrenic & sexually possessed” LOL. It’s that moment when you thought you were so cool, but then find out everyone, including your fellow barking sanghi dogs, have been laughing at you behind your back since day 1. @KanganaTeam. #Arnabgate https://t.co/pFxlUeXH2G

According to the US National Institutes of Health, erotomania is usually described as a rare delusional syndrome that characteristically involves (usually) a woman who believes that a man,
typically of higher social, economic or political status, is in love with her.

Goswami’s perception of Kangana in private chats is in sharp contrast with how he has described her from public platforms, particularly on Republic TV. While interviewing the Queen actor in July last year, Goswami had said, “She speaks her mind. She is unafraid of the powerhouses in the industry because she is the new powerhouse in the industry on her own.”

The alleged leaked WhatsApp chat between Goswami and Dasgupta has caused political earthquakes in India. In the 1000-page leaked WhatsApp chat, Goswami had also allegedly said that former Union Minister Arun Jaitley was ‘stretching it’ at a time the late BJP leader battled for life. Days later, Jaitley died in Delhi.

The opposition parties have enough material on hand with Arnabgate to expose Modi government. Now it is for them to act to spread it in the best way possible to the people.

They have sidedishes like this Arnab chat about Kangana to make it interesting. pic.twitter.com/75QoDNgs3h

Goswami was also seen rejoicing on the Pulwama attack and claimed to know about the Balakot airstrikes in advance. His critics have demanded criminal action against the controversial anchor.