A new portion of an alleged leaked WhatsApp chat with Partho Dasgupta, the former CEO of BARC, has heaped more embarrassment on Arnab Goswami. The latest revelation pertains to former Union Minister Arun Jaitley, who died in August last year. 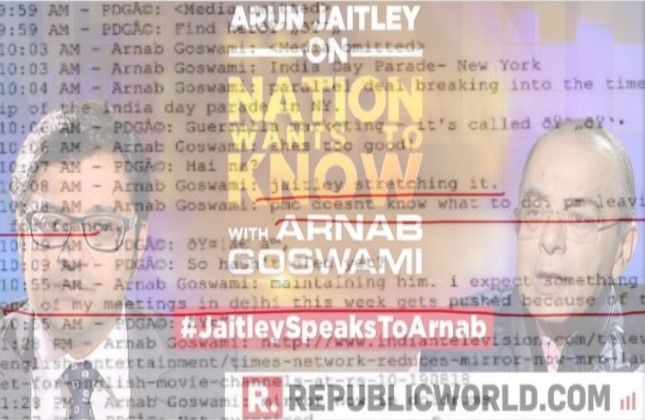 Jaitley died in Delhi on 24 August last year, two years after undergoing a kidney transplant. However, in a chat dated 19 August, Goswami had allegedly told Dasgupta in exasperation, “Jaitley stretching it.” His subsequent message allegedly read, “PMO doesn’t know what to do. PM leaving on Wednesday for France.”

In another conversation, Dasgupta allegedly said in April 2019, “NM/AS should first rejig finance ministry in second term- the economy is screwed-no matter what we tell outside.” Dasgupta allegedly continued,” Jaitley is their biggest failure.” To which Goswami said, “That I agree totally.”

“The economy is screwed.”
“Arun Jaitley is a failure.”

These are things we said on Twitter and got abused for it.

But Arnab is clever. He talked about it in private WhatsApp chats and remained a Right Wing hero. pic.twitter.com/VoqKved46J

Jaitley was the man responsible for ensuring favourable coverage for the BJP-led government at the Centre. Many believed that Jaitley’s clout over the Indian media was unparalleled.

Twitter user Joy Das wrote, “Arun Jaitley nurtured Vultures like Arnab Goswami. So it’s natural that when he was in Hospital, Critical, the Vulture was exasperated “Arun Jaitley is stretching it”.”

Arun Jaitley nurtured Vultures like Arnab Goswami. So it’s natural that when he was in Hospital, Critical, the Vulture was exasperated “Arun Jaitley is stretching it” pic.twitter.com/Z9Vzpkxam9

Journalist Swati Chaturvedi agreed, “Well put. Btw, except more from Goswami unplugged this is only ten percent of the chats.”

Well put. Btw, except more from Goswami unplugged this is only ten percent of the chats https://t.co/vfiyZjhnWr

Meanwhile, Dasgupta, who was arrested by the Mumbai Police in the TRP Scam case, had to be hospitalised on Saturday. He’s been put on oxygen support in the ICU ward of JJ Hospital in Mumbai.