Indian Idol judge Neha Kakkar recently sustained injuries by Himesh Reshammiya’s awkward jump while shooting a behind the scene video on the sets of Sony TV’s singing reality show. Even though Neha later laughed about the injury, initial reactions showed her in pains after being hit in her elbow by Himesh. This came days after Himesh left Neha embarrassed by asking a pointed question about her honeymoon with her husband Rohanpreet Singh, a suitor of ex-Bigg Boss contestant Shehnaaz Gil aka Punjab’s Katrina Kaif. 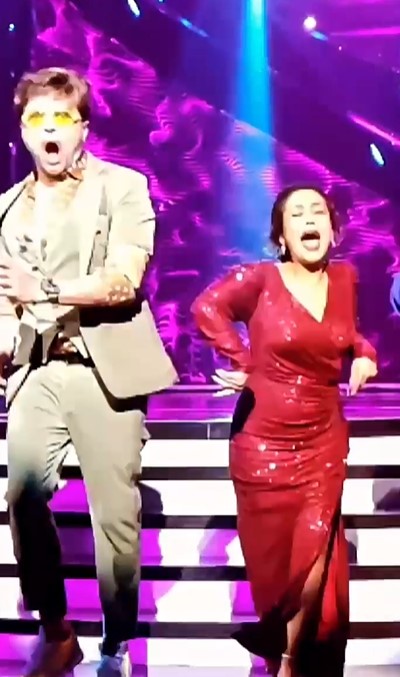 Neha recently shared a video of herself with Himesh and another judge Vishal Dadlani. In the video, the three judges of Indian Idol were seen having a good laugh. In one segment, they were seen walking across the stage. At one place, Himesh and Vishal were seen jumping across the stairs even Neha posed for the camera. It was here that Himesh accidentally hit Neha’s elbow, leaving her in great pain. However, she soon receovered and began to smile at what had just happened.

Sharing the video, Neha wrote, “This has to be The Funniest yet The Cutest Video of Ours!!!! ????.” Vishal wrote in reaction to her video, “Hahahahahahahahahahahahaha, @nehakakkar @realhimesh How lucky are we that we get to goof around like this (plus listening to some epic voices!) and call it “work”! What fun!”

Neha’s fans too reacted overwhelmingly in appreciation of the video. One wrote, “Your beauty gives my smile and your looks kill me lots of love from Nepal and love you so much you are looking amazing and beautiful and gorgeous.” Another wrote, “Finally, something interesting.”

The new season of Indian Idol has already become hugely popular due to its ability to showcase some of the unique singing talents from across India. In one of the recent episodes, Himesh had left Neha red-faced by asking her about the details of her honeymoon in Dubai.