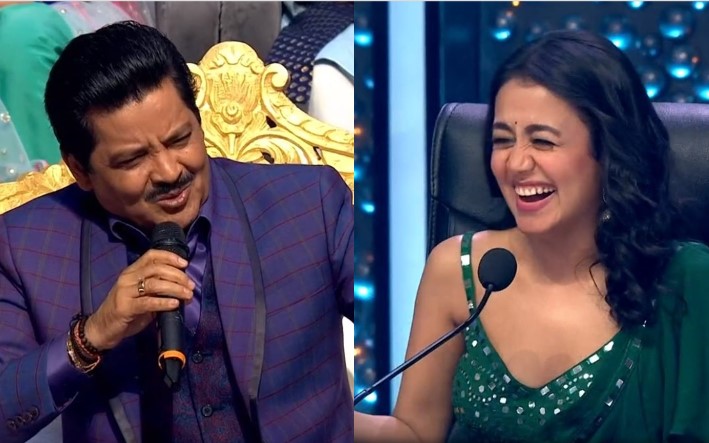 The gaffe happened when Aditya’s mother teased her husband by jokingly linking him with Alka Yagnik. When Alka Yagnik asked her why she was standing at a distance, Deepa said, “When Alka ji is standing close, the fan has to stand at a distance.”

Neha said, “She, the mother-in-law…” Realising that she had committed a huge gaffe, she asked herself, “How did this happen.” Her fellow judge Himesh Reshammiya quipped, “Our episode is not yet complete but the girl has accepted the proposal.”

Deepa told Neha, who was desperately trying to hide her embarrassment, “We love you Neha.” Neha replied, “Love you too.”

“I have come here to get Aditya and Neha married,” said the famous singer. The topic of Aditya’s marriage with Neha continued to dominate the proceedings of the Indian Idol show all throughout the episode.

After Aditya jokingly announced that he was tying the knot with Neha Kakkar on 14 February, the legendary singer said, “Aditya was a very cute child. But his mischief has increased with the passage of time. There have been a few incidents lately but I told media to lay the blame on me and leave my son alone.”

Udit Narayan warned son Aditya to woo Neha seriously since he didn’t want him to regret when he reached his father’s age.

Neha, for her part, termed Aditya’s love for her one-sided. She, however, said that she had to rethink her decision about Aditya since Udit Narayan himself had come to the show to argue his case.

Later in the show, Neha’s parents arrived with sweets as they announced that they were in the show to give their approval to Aditya’s relationship with Neha. The popular singer also shared the cute moments involving herself, Aditya and their respective families.