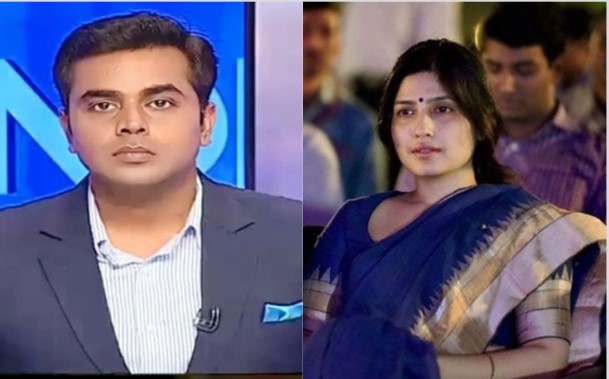 Taking a dig at Dimple Yadav, who could not save her Kannauj seat in the just-concluded Lok Sabha polls, Sinha had writte, “Mayawati’s anger is not justified. When Tipu bhaiya (Akhilesh) could not secure vote for his lugayi (term loosely used for wives in some parts of north India), where would have he got votes for his aunt (Mayawati)? Now the slogan for Samajwadi supporters should be, ‘Chill aunty, so what it happened.”

His crude joke on Dimple, a former parliamentarian, did not go down well with Samajwadi leaders. Although Akhilesh Yadav has not reacted to the tweet by the anchor working for Rajat Sharma-owned TV channel, his party colleagues have been unforgiving in their reactions.

SP leader Anil Yadav sarcastically said that this was not Sinha’s fault. He wrote, “The licking that you are used to, neither do we have it nor we will we give it to you. By the way, what did you secure for your lugayi by using such crude language?”

Another SP functionary Krishna Yadav Kaju wrote, “This Tipu’s wife is your sister. At least, you ought to have spared your sister. I don’t know if RSS supporters look at their sisters like sister-in-law.”

Sinha’s perceived crude tweet for Dimple Yadav came two days after BSP Supremeo Mayawati reportedly called off her party’s alliance with the SP after a dismal showing by the grand alliance in Uttar Pradesh. The SP-BSP-RLD grand alliance had contested on 80 seats but could win only 15 seats with 10 going to BSP alone. Akhilesh Yadav’s wife Dimple lost to BJP’s Subrat Pathal by less than 15,000 votes.