Within hours of GoAir sacking its senior pilot, an IAF veteran, for calling Prime Minister Narendra Modi an ‘idiot,’ netizens took to the microblogging site to target the aviation company with memes and jokes. Such was the intensity of Twitterati’s outrage against GoAir that the word ‘idiot’ became a top trending topic on Twitter in no time. 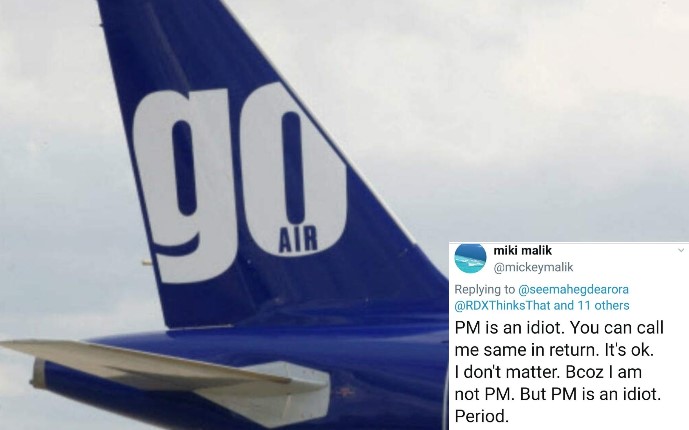 This was after GoAir sacked Captain Miki Malik for his tweet calling PM Modi an ‘idiot.’ This is how Twitterati responded to the airline company’s decision;

Only an IDIOT could have called a GREAT statesman PM as ‘Maunmohan’ Singh.

GoAir sacked the Pilot who called the PM an idiot without mentioning the name of the PM. Even GoAir knows which PM is an idiot.

Criticize the PM, Lose your Job

For a sec I thought this was from the official handle ?#GoAir #Idiot pic.twitter.com/GwCZfux2o8

Very sad to see an airline automatically assume which PM was the idiot. It could have been Imran Khan.

In his controversial tweet, Captain Malik had written on Thursday, “PM is an idiot. You can call me same in return. It’s ok. I don’t matter. Bcoz I am not PM. But PM is an idiot. Period.”

Captain Malik had later tweeted an apology the same day, “I apologise for my tweets about PM, other offensive tweets which may have hurt sentiments of anyone associated. I convey that GoAir is not associated with any of my tweets directly or indirectly as they were personal views.”

A spokesperson from GoAir said that the airline had ‘terminated the services of the Captain with immediate effect.’ Captain Malik is believed to have removed the offensive tweet before locking his Twitter account. The GoAir spokesperson added that the airline did not associate itself with personal views expressed by its employees. But, GoAir failed to explain why it had chosen to sack its senior pilot even though it did not associate itself with the views expressed by him. Also, the budget airline also did not explain as to how it arrived at a conclusion that Captain Malik was referring to the Indian prime minister.