Janta Ka Reporter 2.0
Home Entertainment “I will also toss you to the ground”: Archana Puran Singh of...

Kapil Sharma has long targeted his co-star Archana Puran Singh with cruel jokes on The Kapil Sharma Show. However, the famous comedian-actor got a taste of his own medicine when he attempted to leave Archana red-faced on Instagram by projecting Bharti Singh as the veteran actress. Kapil shared a photo of Bharti disguised as Archana to claim that the latter had lifted him in the air. Reacting to his joke, Archana warned her co-star of consequences when she met him on the sets of The Kapil Sharma Show. The friendly banter and Archana’s wit left their respective fans in splits. This came days after Kiku Sharda and Krushna Abhishek brutally trolled Arnab Goswami for his rant against Salman Khan. 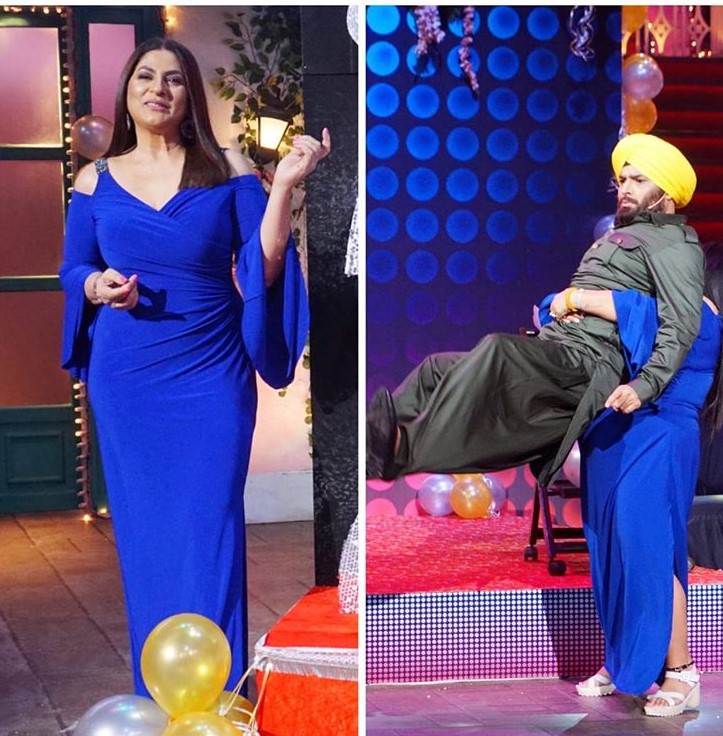 Kapil has long joked about Archana’s masculinity on his show. He recently took to social media to share a photo of himself with a woman, who was dressed in an identical outfit that Archana too had worn to shoot The Kapil Sharma Show. Sharing the photo, Kapil wrote, “Uff yeh kis se panga le liya ? @archanapuransingh yeh naari hai sab pe bhaari. ” (Who did I mess with? Archana Puran Singh, this woman overpowers everyone.)”

Pat came a reply with a ‘warning’ from Archana who wrote, “Kal shoot par tere ko sirf uthaana hi nahin hai maine! Uthaa kar patakna bhi hai @kapilsharma PHIR tujhe pata chalna hai ki ye naari kitni hai bhaari (Tomorrow, not only will I lift you up during the shoot, but I will also toss you to the ground Kapil Sharma. Only then will you realise how overpowering this woman is.)”

However, their fans were quick to spot that the woman lifting Kapil up was not Archana but Bharti, who had dressed in the same outfit that Archana had worn for the shoot. One wrote, “Bharti di and archana ma’am are wearing same thing and barti is the one holding kapil ji???.” Another commented, “The one holding Kapil is Bharti Singh.” “You’ve been lifted up in the air by Bharti Singh,” wrote another fan.

The Kapil Sharma Show has been in the news after it brutally mocked Arnab Goswami for his rant against Salman Khan, who’s also the producer of the show. Kiku Sharda had replaced Goswami’s mujhe drug do rant with the line mujhe jug do, leaving the audience in splits. And if that was not enough, Krushna Abhishek was seen mimicking one of Goswami’s colleagues, Pradeep Bhandari, as he mocked his reporting skills.