Nikki Tamboli has emerged as a new villain after she was seen using MeToo allegations during a fight with Devoleena Bhatatcharjee. Nikki accused Devoleena of threatening Siddharth Shukla with MeToo charges in the last season of the reality show. This prompted many housemates including Arshi Khan and Vikas Gupta to slam Nikki. What also infuriated housemates was Rubina Dilaik’s silence even when Nikki was repeatedly raising MeToo controversy to score a point during a fight. 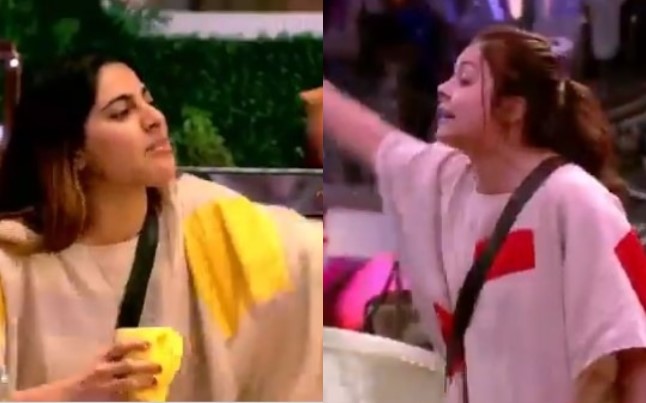 Such was the anger that Arshi later embarrassed Rubina for remaining silent. She told her, “MeToo ka matlab koi film to nahi hoga (MeToo doesn’t mean a film, does it?)” She charged at Rubina Dilaik for not taking a stand in favour of Devoleena when Nikki was repeatedly invoking MeToo allegations.

Devoleena later explained that she had spoken about MeToo allegations in the heat of a moment after a task, adding that she had sorted out the difference with Siddharth later.

Vikas Gupta too slammed Nikki for targeting Devoleena by using MeToo allegations made in the last season.

Bigg Boss show during the last season had taken an ugly turn after Devoleena threatened to accuse Siddharth Shukla of MeToo allegations. Devoolena sensationally threatening to use MeToo allegations to settle personal scores against a fellow housemate from the rival team had triggered a huge row on social media with many slamming her for attempting to dilute what has been an important movement for women in their fight against sexual harassment.

During a weekly task, contestants were asked to make clay ladders. However, things soon became ugly as Paras Chhabra destroyed Siddharth Shukla’s ladder. An incensed Siddharth had gone on a spree to destroy everyone’s ladder in Paras’ team. Devoleena, who was a part of Siddharth’s rival team, had decided to destroy Shehnaaz Gill’s ladder prompting the latter to throw muddy water on her. Soon, all hell had broken loose as contestants from warring factions hurled abuses at each other.

Many contestants including Asim Riaz and Aarti Singh had accused Devoleena of slapping Shehnaaz even though the latter denied remembering the physical assault on her.

Moments later, Devoleena, Rashami Desai, Shefali Bagga and Mahira Sharma had decided to reconstruct the clay. The four women had agreed that while one will build the ladder, the rest of them will stand as guards to stop others from destroying it. However, Siddharth Shukla, who was seen at a short distance from their ladder, soon had risen from his position and begun destroying their ladder. The women were seen pushing him away. But when Siddharth responded by pushing them, they had warned him to not touch them. Devoleena was then heard threatening to level MeToo allegations against Siddharth.

Nikki has found herself in the same situation with fans accusing her of using the topic of MeToo allegations flippantly.