The Supreme Court on Monday reserved its verdict in a plea filed by Republic TV founder Arnab Goswami, who is facing arrest for using his media platform to spread communal tension across India. The Supreme Court bench comprising Justices DY Chandrachud & MR Shah extended the protection from arrest till it delivered a verdict, which it said will take place in the next two days. 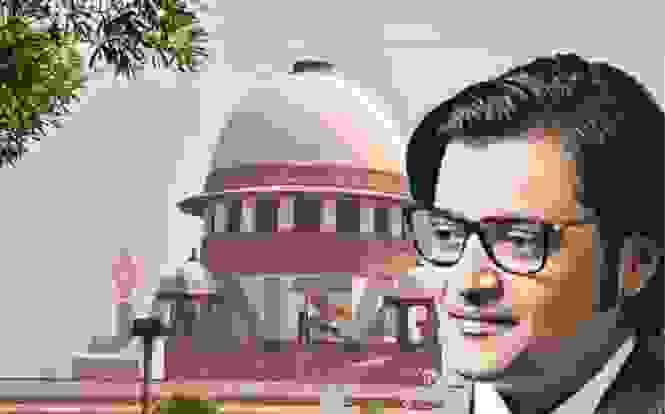 Goswami had moved the top court seeking the quashing of an FIR filed in Mumbai accusing him of disturbing communal harmony over the gathering of migrants in Bandra. Goswami had laid special emphasis on the existence of a mosque near Bandra station when migrant workers gathered there last month even though the Muslims’ place of worship had no significance to the story.

Goswami has hired Harish Salve to represent him. Salve made desperate pleas by repeatedly asking the Supreme Court bench to transfer the case to the CBI, which reports to the central government.

Earlier, Goswami had faced similar allegations when over 150 FIRs were filed against him for communalising the Palghar mob lynching. He was later grilled for over 12 hours at a Mumbai police station.

Salve, according to Livelaw, said in the court, “Please ask the CBI to file a report in the case and give me (Arnab Goswami) an extension of interim protection (which ends on May 14).”

After the bench said that it will reserve its order, Salve said that in the event that the top court allows the Mumbai Police to continue with its probe against Goswami, then Goswami should be given breathing time to move the court for appropriate remedy.