A gut-wrenching video of pregnant Meghana Raj passionately hugging and kissing her husband Chiranjeevi Sarja for the last time has gone viral on social media. 39-year-old popular Kannada actor Chiranjeevi had died of a heart attack on Sunday. 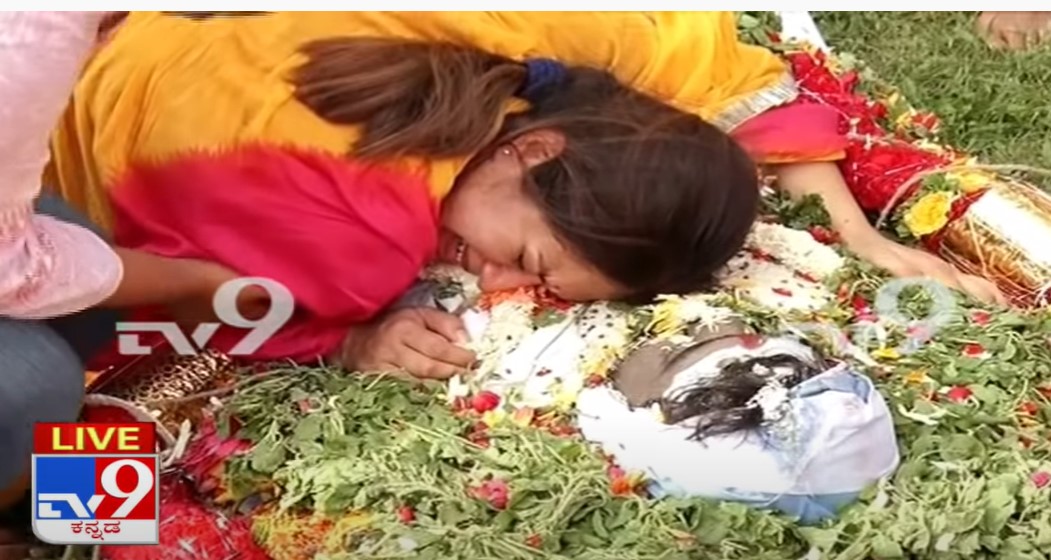 The tragic death of Chiranjeevi, who was the brother of actor Dhruva Sarja and nephew of actor Arjun Sarja, had left the south Indian film industry utterly shocked. Actress Kriti Kharbanda had tweeted, “My first co star, an amazing human being, the boy with the sweetest smile and the nicest heart. I still can’t believe you’ve left us, chiru. My heart aches and cries as I think about you. Rest in peace chiru!”

Actor Prithviraj Sukumaran had written, “Absolutely devastated to hear about the sudden demise of Chiranjeevi Sarja. I pray Meghna and the whole family finds strength to tide through this shock and sorrow.”

Cricket legend Anil Kumble wrote, “Deeply saddened and shocked to hear the passing away of #ChiranjeeviSarja. A young talent gone too soon. Condolences to his family and friends.”

Several Kannada stars including Yash, Shiva Rajkumar and Kiccha Sudeep were seen attending Chiranjeevi’s funeral. However, what left everyone present deeply emotional was Meghana passionately hugging and kissing her husband for the last time.Her family members and friends had to separate a visibly distraught Meghana, who was inconsolable. Meghana is believed to be pregnant with her first child.

Chiranjeevi was reportedly on the phone with his father when on Sunday afternoon when he began to sweat and collapsed. He died on the way while being taken to Apollo Hospital in Jayanagar.

Chiranjeevi Sarja made his debut as an actor from the 2009 film Vayuputra. This earned him the Revolutionary Film Award for Best Debut (Male). He went on to act in as many as 22 films including Samhaara, Aadyaa, Khaki, Aake, Amma I Love You, Prema Baraha, Seizer, and Varadhanayaka among others. His last film was Shivarjuna, which was released just before the nationwide lockdown in March this year.