The ghost of Rhea Chakraborty came to haunt Arnab Goswami on Monday afternoon as netizens trended ‘Sorry Babu’ soon after the Bombay High Court rejected Arnab Goswami’s plea for an interim bail in the abetment to suicide case. Goswami was told by the Bench of Justices SS Shinde and MS Karnik to go to the sessions court in Alibaug to seek bail. The setback from the Bombay High Court to the Republic TV founder provided netizens an opportunity to take a dig at him by trending ‘Sorry Babu.’ This came on the day the Delhi High Court made scathing observations on TV journalism while hearing a case filed by 38 Bollywood production houses owned by the likes of Salman Khan, Shah Rukh Khan and Karan Johar among others against Arnab Goswami, his TV channel, Times Now and its editors, Rahul Shivshankar and Navika Kumar. 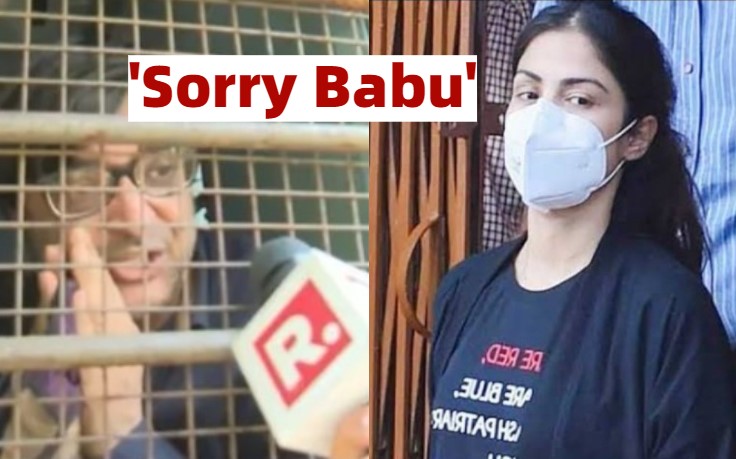 Twitterati detected a glaring irony in the Bombay High Court’s verdict as they took a dig at Goswami. Borrowing the words uttered by Rhea Chakraborty about Sushant Singh Rajput, Twitter users flooded the microblogging site with memes and jokes on ‘Sorry Babu.’

We want Arnab back ??

Arnab: “My life is in danger. Give me bail.”

“Sorry Babu”….. thank you court
He is in right place pic.twitter.com/zM0DsHTGO3

Judge is also saying
I am “Sorry Babu”#IamIndianAndIdontSupportArnab ???✌️ pic.twitter.com/RIkNRlKrIa

So Sad Really I Am Very Sorry Babu !! pic.twitter.com/pTxyC28uCc

Holding a debate on his TV channel in August, Goswami had said, “My dear viewers, tonight I have for you a sensational testimony. The man, who took Rhea Chakraborty inside the mortuary at Cooper Hospital on 15th June, has revealed that after she saw Sushant’s corps, Rhea uttered the word, ‘I am sorry Babu.’ Why did she say that? What was she sorry about?”

Republic TV had trended hashtag #WhySorryRhea as Goswami debated the reported remarks made by the former girlfriend of Sushant Singh Rajput.

Rhea had clarified the reason why she said ‘Sorry Babu’ after seeing the dead body of her ex-boyfriend. Speaking to India Today, she had said, “Yes, what else is someone supposed to say after someone has lost their life? I am sorry you have lost your life. I am sorry that your death has been made into a joke. I am sorry that your last memory is not of your good work, intelligence or your charity. That is also misconstrued. Aur kya bolenge? (What else would you say?)”

In another development, the Delhi High Court came down heavily on the questionable journalism by asking Republic TV and Times Now to ensure that no defamatory content was uploaded on social media or displayed on their channels, while hearing a plea by Bollywood producers seeking to restrain them from making irresponsible remarks. Some of the production houses among them are owned by Salman Khan, Shah Rukh Khan, Aamir Khan and Karan Johar.

In strong observations, as reported by news agency PTI, the high court cited the death of Princess Diana while trying to escape the media chase, and said there needs to be ‘some toning down’ as people are ‘afraid of the fourth pillar of democracy’ because of its powers. The court sought replies from Republic TV, its editor-in-chief Arnab Goswami and reporter Pradeep Bhandari, Times Now editor-in-chief Rahul Shivshankar and group editor Navika Kumar, and intermediaries Google, Facebook and Twitter on the plea.