Three women associated with the Ambani family namely Shloka Mehta, Isha Ambani and Radhika Merchant have often found themselves under the media spotlight with their fashion quotient often making headlines. Shloka got married to Akash Ambani, the son of Mukesh and Nita Ambani, in March this year. Isha, the famous Ambani daughter tied the knot with Anand Piramal in December last year. As for Radhika, she is set to marry Anant Ambani and become the second daughter-in-law of Nita Ambani. 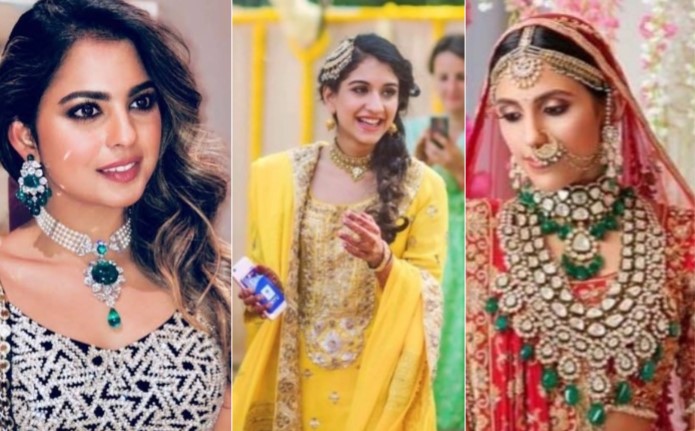 While the young Ambani women are known for their exquisite fashion sense, their love for emeralds has been consistent. Here are five occasions when the three women flaunted emeralds as part of their fashion statement.

Shloka was seen carpooling with Rohit Sharma at the Diwali bash hosted by Mukesh and Nita Ambani on Thursday night in Mumbai. While her husband Akash Ambani was seen dressed in a royal blue kurta and Nehru vest with silk churidar bottoms, Shloka had opted for a bejeweled choli with a baby pink satin printed lehenga and dupatta. She had completed her fashion statement with a maroon velvet zari blouse with a sea-green brocade saree with emerald and pearl jewellery.

Shloka had chosen lace lavender separates with a similar colour long-line lace jacket. To complement her look, the Ambani bahu opted for an emerald and diamond choker. But what appeared to nail the look was her hair in soft curls with statement pink lips. Shloka’s dress was designed by Anamika Khanna.

As the Ambanis arrived, Abhishek Bachchan welcomed them outside the house before escorting them into the house. Nita Ambani had chosen a pink lehenga choli for the occasion, while Radhika had opted for an all-white Anarkali. She completed her fashion statement with open tresses and an emerald necklace. As for Mukesh Ambani and son Anant, they were dressed in a traditional kurta pajama.

Shloka Mehta during her wedding

Her fans may not remember but it’s worth remembering that the Ambani bahu had dazzled in her custom bridal couture, which she paired with metallic-bronze eyes and minimal makeup. But the most prominent highlight of her wedding outfit was a beautiful diamond and emerald stone necklace.